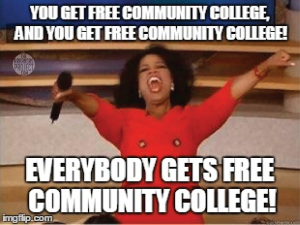 President Obama’s “State of the Union” address last week was another lackluster spectacle filled with the same tired cliches he’s spouted throughout his two terms in office.
Probably the most interesting part of it actually occurred after his speech — when he was interviewed by a lady who wears green lipstick.
His newest bright idea seems to be a “free” community college plan (it’s completely free, unless you’re a taxpayer!), based on a flaw of progressive educational thinking that’s been around for decades now. That flaw is the reasoning that since some people will benefit from attending an institution of higher education; therefore, pretty much everyone should attend an institution of higher education.
The great Neal McCluskey of the Cato Institute rightly called the plan “educational folly.”
From McCluskey:

The fact of the matter, according to the federal government’s own data, is that community college completion rates are atrocious. The federal Digest of Education Statistics reports that a mere 19.5 percent of first-time, full-time community college students complete their programs within 150 percent of the time they are supposed to take. So less than 20 percent finish a two-year degree within three years, or a 10-month certificate program within 15 months. And that rate has been dropping almost every year since the cohort of students that started in 2000, which saw 23.6 percent complete. Moreover, as I itemize in a post at SeeThruEDU.com, even when you add transfers to four-year schools, the numbers don’t improve very much. Meanwhile, interestingly, the for-profit sector that has been so heavily demonized by the administration has an almost 63 percent completion rate at two-year institutions, and that has been rising steadily since the 2000 cohort.
…
Of course, one of the biggest problems in higher ed is that for so much of it, someone other than the student is paying the bill, tamping down students’ incentives to seriously consider whether they should go to college and what they should study if they do. This proposal would only exacerbate that problem, essentially encouraging people to spend two years in community college fully on the taxpayer dime while they dabble in things they may or may not want to do—and as they maintain a pretty low 2.5 GPA—then maybe focusing a little more when the two years is up and they have to pay something themselves.

McCluskey also mentions that many jobs that are expected to be available in the near future don’t actually require a college degree. At a time where many college graduates are entering the workforce with heavy student loan debt and few middle-class job options, it’s time for policymakers at the state and federal level to consider options beyond just sending more kids to college.