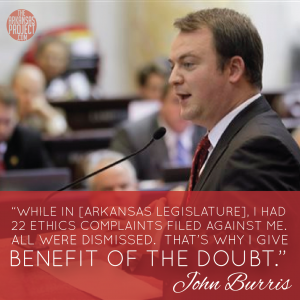 I admit that I had low expectations when I first heard that former state legislator John Burris had become a columnist for Talk Business & Politics. I’ve been pleasantly surprised. Too many columnists seem to believe that the dreariest, most shopworn kind of conventional wisdom is something that’s worth sharing with the world. Burris has been blessedly free of this malady so far. Even though we’ve had sharp disagreements over Medicaid expansion in the past, I think Burris is a smart guy and a sharp observer who writes a column that is well worth reading.
His newest column, for instance, delves into the “guilty until proven innocent” mentality that is manifesting itself around disgraced ex-judge Mike Maggio and some of his supporters and associates. Unlike some, Burris actually bothered to read the plea agreement that Maggio’s prosecutors produced. Burris’s column explores an issue which so far has been largely unplumbed by the media: is there any reason to think anyone besides Maggio acted badly? For instance, when Gilbert Baker helped raise money for Maggio’s campaign, was Baker involved in anything resembling bribery? Prosecutors claim to think so, but Burris doesn’t see it:

So as I read the guilty plea signed by Maggio, there was a notable absence of the “smoking gun” I was scanning so quickly to find. It says Morton gave a lot of money to a lot of people. It says Gilbert helped raise and deliver that money. Some of that money was given to Maggio, who by most accounts seems like an insecure, sub-par attorney with a host of personal and professional problems other than this accusation of bribery. That’s worth noting, because “other problems” can be powerful leverage and motivation when in search of a self-serving plea deal.
…
But here’s the but. Maggio states that when the money was given, Baker texted about the pending case and said “win lose or draw, you’re our guy.” Isn’t that a pretty big deal? Isn’t that the opposite of bribery? Maggio says he took that as a reminder that the ruling was important, rather than interpret it to mean exactly what it said.
Anyone that knows Baker knows that he can let his words and his hands occasionally get ahead of his thoughts. But in this case – at least according to Maggio – it seems like that didn’t happen. At least for now, it looks like Baker was cautious and emphasized the actual lack of a quid-pro-quo. You can argue that it was simply understood, but that could apply to any political contribution to any decision-maker in any branch of government.

None of us like to think about the fact that prosecutors might sometimes abuse their powers or pursue unjust verdicts, but sometimes it’s a reality. John Burris deserves thanks for reminding us all not to rush to judgment against Baker and his associates – especially on the basis of evidence that either doesn’t exist or that prosecutors are, so far, unwilling to reveal.
Burris publicized his column over twitter: his tweet itself is worth considering: