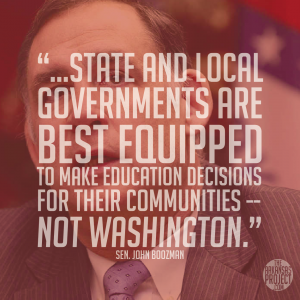 Did you know it’s National School Choice Week?
It is indeed, and there’s even a Senate resolution to prove it. As a parent, I’m a big fan of school choice (not that I actually have any). There are a lot of different things that are important to parents when it comes to educating their children. Some value a neighborhood school. Some want a school with rigorous academics. Some prefer a Montessori environment or a good sports program — some just want to send their children to a safer school. They may have different individual desires, but overall what parents want is the choice to select an education that fits their child. Most often, this is an impossible dream.
Senator John Boozman was an original cosponsor of the Senate resolution declaring National School Choice Week. When I contacted his office to ask why he thinks school choice is so important, here’s what he had to say:

As a former school board member I understand that state and local governments are best equipped to make education decisions for their communities – not Washington. Students and parents deserve to choose the education that meets their needs. I’m committed to empowering parents with the ability to choose the best education options for their children. I’m proud to support this resolution and the outstanding educational choices that Arkansas offers.

Unfortunately, if you’re a parent in Arkansas looking for choice in your child’s education, you’re worse off than most states. With no voucher law and a weak charter school law, you’re pretty much stuck with whatever school the education bureaucracy says your child must attend. According to this report, the state also places a moderate burden on home schooled students. At the state level, there is a lot of work to do for those who support school choice.
It’s unclear what Governor Hutchinson will do, if anything, to expand school choice in Arkansas. According to the Friedman Foundation for Educational Choice, he has said it’s important that parents have options when it comes to educating their children. But it also notes that he isn’t a supporter of school vouchers.  There are many school choice initiatives he could champion short of a full voucher program, however. He’s just starting his term, and it doesn’t appear that educational choice is a high priority.
Because education is largely a function of state and local governments, the federal government has a lesser role to play in promoting school choice. According to Sen. Boozman’s staff, he’s working to include funding for a federal charter school program. He would also like to see as much flexibility as possible for parents and students included in the No Child Left Behind Act reauthorization.
One area where the federal government could improve school choice is for children with disabilities. When I worked for a U.S. Senator, one of the initiatives we were exploring would have given vouchers to parents of special-needs children, so their parents could have much more choice in services for their children. Because the federal government provides significant funding for special education, this is one area where Congress has a lot of leeway to expand school choice.
This School Choice Week, it would be fitting for the state and federal lawmakers of Arkansas to consider just what they could do to give parents a wider range of options to meet their children’s educational needs.