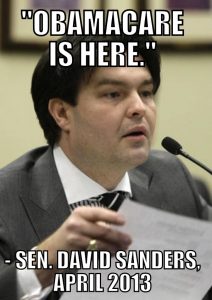 Yesterday I wrote about the latest Obamacare implementation delay. Today, the Wall Street Journal uncovered an additional wrinkle. Buried in the latest HHS technical bulletin is a provision that excuses millions of Americans from complying with the Obamacare individual mandate — the one that was supposed to require them to purchase health insurance this year.

In 2013, HHS decided that ObamaCare’s wave of policy terminations qualified as a “hardship” that entitled people to a special type of coverage designed for people under age 30 or a mandate exemption. HHS originally defined and reserved hardship exemptions for the truly down and out such as battered women, the evicted and bankrupts.

But amid the post-rollout political backlash, last week the agency created a new category: Now all you need to do is fill out a form attesting that your plan was cancelled and that you “believe that the plan options available in the [ObamaCare] Marketplace in your area are more expensive than your cancelled health insurance policy” or “you consider other available policies unaffordable.”

This lax standard—no formula or hard test beyond a person’s belief—at least ostensibly requires proof such as an insurer termination notice. But people can also qualify for hardships for the unspecified nonreason that “you experienced another hardship in obtaining health insurance,” which only requires “documentation if possible.” And yet another waiver is available to those who say they are merely unable to afford coverage, regardless of their prior insurance. In a word, these shifting legal benchmarks offer an exemption to everyone who conceivably wants one.

In other words, just about anyone can now claim a “hardship exemption” from the mandate that requires individuals to purchase health insurance — without documentation and regardless of whether or not the individual was previously insured.

This is a curious development because, as the WSJ points out, President Obama has long argued that the individual mandate is essential to Obamacare’s success and has continued to threaten to veto bills that would delay or repeal it. Additionally, the WSJ reports that many in the insurance industry are worried about the precedent Obama’s actions are setting: “The longer it is not enforced, the less likely any President will enforce it.”

We are now forced to consider a disturbing possibility: the Obama Administration doesn’t really care whether Obamacare works or not. After all, if the individual mandate is not important to President Obama, what part of Obamacare is? Is it just the raw fact of increased control over people’s lives that makes Obamacare worth preserving? And if that’s not the answer, what is?