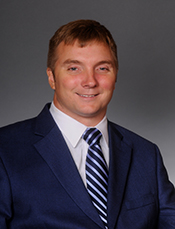 State Representative Josh Miller has been the subject of many state (and even some national) media reports over the past few weeks, which have often been aggressively unflattering. Miller’s unwavering opposition to Medicaid (“private” option) expansion is largely responsible for this attention. While opposition to Medicaid expansion is quite commonplace — among both legislators and voters — Miller’s position in Arkansas history is anything but common.

Elected to the legislature in 2012, Josh Miller is the first member in the history of the Arkansas General Assembly to be bound to a wheelchair. He doesn’t shy away from discussing his circumstances — in fact, Miller says he takes every chance he gets to talk about his situation because it is the consequence of a very bad decision.

About ten years ago, Miller was involved in a catastrophic car accident that left him paralyzed. There was alcohol involved, by his own admission. As a result of the wreck, he spent five months in the hospital recovering from his injuries and undergoing therapy. Given that Miller was uninsured at the time, Medicaid covered many of his medical expenses.

Fast forward to 2014: in recent weeks, and especially during the private-option debate, liberals in the media suddenly realized that Miller — who has been blunt about his involvement with traditional Medicaid — continued to vote against funding Medicaid expansion. Outrage ensued; hit pieces emerged. Miller received an extraordinary amount of hostile emails and phone calls from across the country. The outcry focused on one talking point: Miller wanted to “deny the same services he has benefited from to others.” Apparently, as Miller put it, liberals just can’t handle the idea of a disabled person being concerned about government spending.

The charge that Miller wants to deny essential services to the needy or disabled is patently false, of course. Rep. Miller fully supports the traditional Medicaid program and has always wanted to see it fully funded. What Miller opposes, however, is a massive expansion of Medicaid — a program designed to serve the truly needy– that expands coverage to able-bodied people.

I contacted Rep. Miller for a brief interview. I wanted to give him a chance to clear up any misinformation that was being spread, and also get his thoughts on Medicaid policy moving forward. To begin, Miller expressed frustration about inaccuracy in the media regarding his experiences:

I made the bad mistake of talking to Max Brantley. That’s what got all this started. My thinking was that he was gonna do a piece on me anyway, so I thought I might as well get my side of the story out there. I got quoted on, I think, two things. He didn’t do an accurate job of reporting what he heard.

First and foremost, my life and my decision-making process — just the way I was living in general — in my early twenties was reckless and was unacceptable for a Christian young man. You know, the Lord dealt with me on it. I’m not a perfect person now by any stretch of the imagination, but I always want to be quick to give him the praise and the glory and express my gratitude that I’m still here. I certainly did not deserve to be and I don’t deserve the life that I have now. I don’t take that for granted or take that lightly. We had our accident; we were drinking-and-driving. We’d been to a big concert and just behaving stupidly and I’ve never backed away from that. I take every opportunity I can to talk to school groups and church groups and groups of young people every chance I can to try to talk to them about the effects of making bad decisions. My story really shouldn’t be a surprise to anybody who’s followed me very much because I’ve never been anything but upfront about how I got in this situation.

Miller also wanted to set the record straight on his medical bills. The initial hit piece on Miller claimed that he had charged “$1 million” to the Medicaid program. Miller says this is incorrect:

Immediately following the accident I did five months — I was in ICU for two months at St. Vincent and I was in a regular hospital room for a while, and then in rehab. The total bill on all that was a little under $700,000. Of course I did not have insurance. The hospital staff got me signed up on Medicaid. Medicaid paid under $300,000 of almost $700,000. My family made payments, I made payments. Ultimately the hospital and various doctors came back after a couple of years and said “You’ve done enough and, whatever balances are out there, we’re going to write off.”

He added that, while he was on disability for a while, he is no longer on disability. Instead, he works and provides for his family.

As for the idea that he’s a hypocrite because he has benefited from traditional Medicaid, Miller was quick to point out that his attempt to stop the Obamacare “private” option is rooted in his desire to preserve the Medicaid program for those who truly need it:

To conclude, I asked Rep. Miller what he envisions happening in the future regarding ending the Obamacare “private” option:

I think we are going to have an opportunity especially after the election this year to reform it a little bit. Rep. Farrer and myself and several others are working on a plan about reforming Medicaid in general. I think Tim Griffin has made this statement, that if the private option is such a great idea, why didn’t we try it out on the existing Medicaid program first? And I agree with him 100 percent.

As for how we will pay for the “private” option in the future:

I think there are a lot of good things, in theory, that are in the private option. Conservatives, we’ve got some fundamental problems. Number one, we’re expanding a program when we don’t have a clear path moving forward on how to pay for it. That’s reality. I don’t care who says what, there’s not a legislator in the Arkansas legislature right now who can tell you “This is a clear-cut path moving forward on how we’re going to pay for every bit of this in three years when we are forced to pick up the tab.” That’s reality.

There are several of us who have said all along, since last year, “Let’s take steps to reform and fix our existing Medicaid program that’s going broke before we agree to expand it.”

Representative Miller’s story of perseverance in the face of extraordinary challenges is an inspiration to me. I wish more lawmakers shared the personal strength that he has brought to the battle against big government.

3 thoughts on “Miller On The Media, Medicaid, and Moving Forward”