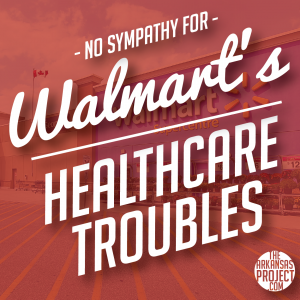 You may have heard the news earlier this week: Wal-Mart announced that it will soon do away with health insurance for approximately 30,000 of its part-time workers.
From the AP:

You might be thinking: how sad for workers to be kicked off their private insurance plans. Well, according to the progressive types over at ThinkProgress, you’d be wrong! They’ve explained that these employees can now go look for Obamacare plans paid for by taxpayers.
From ThinkProgress:

On top of that, since Obamacare’s insurance marketplaces give people a new option for getting insured that isn’t dependent on their employer, the part-time Walmart workers who are losing their coverage aren’t necessarily in a bad spot. They can probably get cheaper and more comprehensive health policies on the marketplaces, thanks to the federal subsidies that will help them pay for those plans. Federal subsidies are only available to people whose employers don’t offer them health insurance through their job.
“If part-time workers do get benefits, it’s often skimpy coverage and they have to pay a lot for it,” Levitt explained. “But, under the Affordable Care Act, simply getting offered benefits at work makes you ineligible for premium subsidies in the new health insurance exchanges. So, low-wage part-time workers are probably better off not getting offered skimpy coverage and instead applying for subsidies in health insurance exchanges.”

This is just another example of the unholy alliance between big government and big corporations. If a corporation wants to cut employee health insurance costs, it can dump employees onto public exchanges.
Another nugget from the AP article gives Wal-Mart’s incredibly lame explanation for having to cancel some part-time plans:

The announcement comes after Wal-Mart said far more U.S. employees and their families are enrolling in its health care plans than it had expected following rollout of the Affordable Care Act, which requires big companies to offer coverage to employees working 30 hours or more a week or face a penalty. It also requires most Americans to have health insurance or pay a penalty.

Now, I’m sympathetic to 99 percent of companies struggling with employee health insurance problems in a post-Obamacare world. However, because Wal-Mart lobbied for the employer mandate, a key aspect of Obamacare, in 2009 when the policy was being debated, my sympathy for them is a bit more nuanced. That was a classic case of a politically-connected corporation using government to crowd out competition — and now you (and every other taxpayer) will be footing the bill for health insurance for some of their employees.