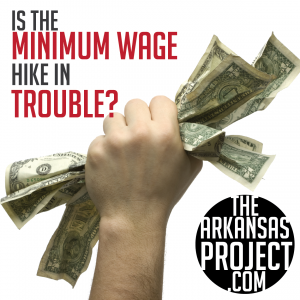 It looks like the minimum wage increase initiative is threatened by a couple of self-inflicted wounds.
A  special master’s report filed today by Special Judge John B. Robbins found that the Give Arkansas A Raise Now campaign submitted approximately 8,501 signatures that are invalid due to apparent forgery.
Dan Greenberg, attorney and Advance Arkansas Institute president, said of the report’s findings:

There are two very interesting things about this report. One is a matter of fact. The other is a matter of law. In fact, the special master found that thousands upon thousands of signatures were invalid because of forgery, and it appears that the forgery is linked to the consulting firm, the Markham Group.
On the point of law, even though there was an epidemic of forgery, the Supreme Court is going to have to decide whether that forgery disqualifies the votes for the minimum wage initiative to be counted. That is a matter of law — but surely as a matter of common sense, if the Supreme Court permits the signatures that are tainted by forgery to be valid, this is going to be an engraved invitation for fraud in the future. If the Court lets these kinds of forgeries stand, it creates a huge incentive for signature collectors to produce fraudulent signatures.

Give Arkansas A Raise Now submitted approximately 64,000 signatures in July, which was slightly above the minimum requirement of 62,507. That was enough to give the group another 30 days to collect more signatures — which is the grace period that lets signature gatherers ensure they have collected enough valid signatures to get the proposal on the ballot in November.
The Special Master’s Report filed in the Supreme Court of Arkansas was a result of a lawsuit brought by Jackson Stephens Jr. against the Arkansas Secretary of State’s Office. The lawsuit challenges whether the minimum wage ballot initiative should have been approved to be on the ballot. The Supreme Court of Arkansas is expected to make a final decision within the next two weeks.
As a non-lawyer, I won’t attempt to predict what the court will decide, but it does seem that setting a precedent of allowing groups to forge signatures — so as to meet a deadline to have more time to collect signatures — wouldn’t be a good thing for the ballot initiative process.
The Washington Free Beacon had a comprehensive look at Stephens’s lawsuit yesterday.
From the Washington Free Beacon:

Despite apparent defects in the signature-gathering process, supporters of the minimum wage hike hailed the question’s inclusion on the ballot when the secretary of state certified it in September.
Among those supporters was a Little Rock-based political consultancy called the Markham Group.
“The Markham Group is proud to be the team that helped put an increase in the Arkansas minimum wage on the ballot,” the firm said on its website. It specifically credited GARN with making it happen.
News reports indicated that GARN had hired Markham to manage its campaign, but GARN never disclosed any payments to the consultancy.
…
In April, AIA listed $10,800 in payments to four individuals—Lance Strother, Clint Simpson, Melvin Barnes, and Alex Keith Rancifer—who were listed as contacts for a Democratic Party of Arkansas canvassing event on April 26 to gather signatures for the minimum wage ballot measure.
On April 28, the party wrote AIA a $10,000 check. Days later, it gave the group another $10,000.
Rancifer was a frequent subcontractor for Markham’s AIA work. A former Bill Clinton campaign aide, he worked for U.S. Airways until March, according to his LinkedIn page. By March 13, he was receiving compensation and health insurance from Markham.
His role in the signature gathering process has come under scrutiny due to Stephens’ lawsuit. Rancifer acted as a notary for as many as half of the petitions that were eventually submitted to the secretary of state.
However, exhibits filed by Stephens’ attorney show that signatures on at least six petition pages look entirely different, though they all say Alex Rancifer and appear next to his notary stamp.
“In light of the large number of signature styles purporting to be Mr. Rancifer’s, it is apparent that other individuals were signing on behalf of Mr. Rancifer,” Stephens said in his complaint. Those other individuals appear to have fraudulently notarized “likely thousands of petitions,” he wrote.

You can read some of our previous coverage of the minimum wage ballot initiative here and here.

One thought on “Report: Thousands Of Give Arkansas A Raise Now's Signatures Invalid”