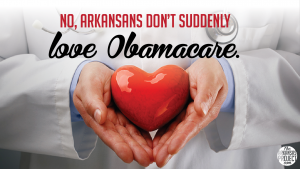 Q: Senate Republicans have discussed a plan to repeal the Affordable Care Act now and replace it two years from now with a yet-to-be-determined plan. Do you support or oppose this?
30% Support
52% Oppose
18% Don’t Know

To summarize: this poll suggests that barely a majority of Arkansans oppose repealing the Affordable Care Act and giving Congress two years to come up with an alternative program two years later. Unfortunately, this question doesn’t adequately describe the Senate Republican plan to repeal and replace Obamacare. Their plan would repeal Obamacare, but it would also leave the existing program in place for a two-year transition period while lawmakers develop Obamacare replacement legislation.

The poll question makes it seem like there’s no such transition period in the legislation. If all you know about the Senate Republican plan comes from the poll question, it’s no wonder a majority of respondents opposed a (fictional) plan that repeals Obamacare “now” and then is replaced two years later with a “yet-to-be-determined plan.”
A more reality-based question would’ve asked Arkansans what they thought about this: “Senate Republicans have discussed a plan to preserve the ACA for two years and then replace it.”
It gets worse. Unfortunately, the Talk Business & Politics -Hendrix College poll’s second question wasn’t much better than the first.

Q: Should the federal healthcare plan retain money for Medicaid expansion as used in Arkansas for the Arkansas Works program, formerly called the private option?
36% Yes
20% No
44% Don’t know

Asa Hutchinson, who has spoken out against “repeal and replace” legislation in the Senate, might answer no to this poll question. Although Hutchinson is a supporter of the “Arkansas Works” program, he wants to move enrollees earning an income above the federal poverty level off of Medicaid expansion and onto the federal exchanges. Hutchinson’s plan would mean less money being “retained” by Arkansas for Medicaid expansion.

Jay Barth, a political science professor at Hendrix College who crafted the poll, didn’t return a call for comment.

In fairness to Barth, I understand that it can be difficult to summarize complex legislation into a short poll question. However, his most recent work falls so short of the mark that it makes the results meaningless, with one exception: it almost seems as if it’s an attempt to confirm the biases of those hoping to stop “repeal and replace” legislation in the Senate.