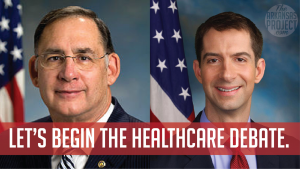 Senators voted 50-50 on a procedural “motion to proceed” to begin debate on alternative options to Obamacare. The 50-50 tie was broken by a “yes” vote from Vice President Mike Pence.
Both of Arkansas’s Senators voted for the motion.

John Boozman said in a statement to The Arkansas Project:

Arkansans have been calling for a repeal ever since Obamacare was forced upon them. Today, we moved closer to making that a reality. Obamacare is not sustainable and preserving the status quo is not an option.

This is just the first step. While much work remains to be done, this vote signals to the American people that we remain committed to repairing our health care system by putting into place a system that ensures access to affordable, quality care for every American.

We’ve talked about this now for a long time…for seven years. This vote today is simply a procedural vote, what they call a motion to proceed, to actually take up the House bill. The budgetary process under which we will debate and vote on this bill is by far the most open process in the Senate. There is no way to block an amendment. Every Senator gets to offer an unlimited number of amendments.There’s no time limit on the debate which means we’ll keep going until the cows come home or a 100 Senators get exhausted. We can’t say what the final product will be because we don’t know what amendments will be introduced or passed.We do know that if we don’t start the debate we can’t try to fix the problems in our healthcare system.

A Cotton spokeswoman didn’t return a request for comment Tuesday.

Three different bills will be introduced by Senate Majority Leader Mitch McConnell that range from full repeal and replace in two years to “skinny repeal” that would only remove the penalties on individuals who don’t purchase health insurance and employers who don’t offer health insurance. McConnell will also put forward the same partial repeal legislation that didn’t receive enough support for passage last week.

If any of this legislation is to become law, it’ll require near unanimous support from Senate Republicans — due to Senate Democrats pledging to vote against any of these changes to Obamacare.