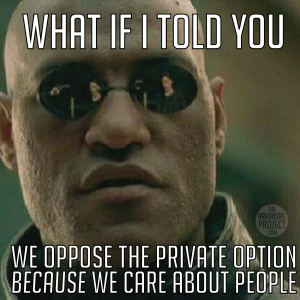 What was the most overwrought liberal reaction to the 2014 Republican midterm victories in Arkansas? An article yesterday by Monica Potts in The Daily Beast probably wins first prize.
Her analysis goes something like this: Republicans won a lot of elections in Arkansas last week. Therefore, the “private option” might be in trouble. Therefore, Arkansas no longer believes in compassion.
From The Daily Beast:

What does it mean for the people of the state? Arkansas has continually ranked as one of the least healthy states in the country, and has had one of the worst health care systems. Arkansans can expect to die at a younger age than their counterparts in wealthy, healthy states like Connecticut and Massachusetts.
Yet, Arkansas had been marginally healthier than the states surrounding it. All of the poor states in the mid-South show up at the bottom of all the good lists and the top of all the bad ones, but my little state had always done at least a little bit better than Mississippi, Alabama, and sometimes Louisiana.
Why? Because it had a government that cared about its people. Now I’m afraid that’s going by the wayside. Which means the state has now pulled what I like to call a Full Huckabee. Once, Arkansans believed compassion and good citizenship had roles in government. Now, their state politics, like Huckabee’s career, have been taken over by concerns over money, power, and special interests. And as usual, it’s at the expense of its neediest citizens.

You see, before November 2014 — before Arkansans overwhelmingly voted for Republicans across most of the state — we “had a government that cared about its people” and “believed compassion and good citizenship had roles in government.” Now, with Republicans in charge, our politics “have been taken over by concerns over money, power, and special interests,” according to Potts.
Great analysis, Monica!
Anyone surprised by last week’s election results wasn’t paying much attention. Potts must have missed a poll showing 60 percent of likely Arkansas voters having an unfavorable view of Obamacare — and, therefore, an unfavorable view of the private option.
The title of Ms. Potts’s article is “Arkansas’s Blue Collar Conservatives Don’t Know What’s Coming.”
Presumably, by “blue collar” she means people who work full-time — something that not many “private option” enrollees do. Therefore, our “blue collar conservatives” were actually quite justified in electing conservative Republicans who are skeptical of the “private option.”
From UncoverObamacare.com:

Ms. Potts’s concerns about compassion are a little tardy: even before the 2014 elections, we documented cases like Chloe from Walnut Ridge, who is currently being denied a drug by the state that doctors believe could help with her cystic fibrosis. There are lots of words we could use to describe the way that the private option assists able-bodied adults while ignoring the problems of the truly needy, but “caring” isn’t one of them.
It isn’t just that Ms. Potts’s piece demonstrates large errors: it also demonstrates small ones. She explains that “Republicans won all four races for the state senate, increasing their lead in that chamber by two, and they’ve all come out against renewal.” This news will likely come as a great surprise to recently re-elected state senators Jason Rapert and Bill Sample, two establishmentarian defenders of the private option.
But Ms. Potts’s biggest error is her indefensible premise that a government that taxes more and spends more is a government that cares more about its people. It is almost as if she never realized that spiraling increases in taxes and government debt do not, in fact, help people or demonstrate that government cares about them.

One thought on “Liberals Freak Out Over GOP Victories In 2014”