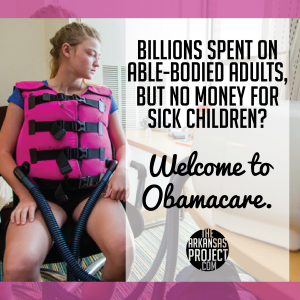 In the states that hope to get Medicaid spending under control, an ObamaCare Medicaid expansion puts truly vulnerable patients at even greater risk. While states would have to cut an average $2.32 in spending for currently-enrolled Medicaid patients in order to save $1.00, they would need to cut services and benefits for the able-bodied, childless adult expansion population by a whopping $10.00 just to save a single state dollar in 2020. This is because state funds will cover only 10 percent of the costs of newly-eligible individuals.

Arkansas is one of the states that accepted the Obamacare Medicaid expansion, and we’ve already seen expansion enrollees moving to the front of the line. Now, according to reports, the truly needy are being denied treatment — but able-bodied adults continue to receive care at no cost to them.
From the Wall Street Journal:

In a lawsuit filed in Arkansas federal court last month, three people suffering from the fatal lung disease allege Medicaid officials have for two years denied them access to Kalydeco because of its cost. The plaintiffs allege state officials have violated their civil rights under federal law governing Medicaid, the government-run insurance plan for the poor.

One of the plaintiffs in the suit is 14 year-old Chloe Jones of Walnut Ridge. Chloe suffers from cystic fibrosis and her doctors believe she would benefit from the drug. But the state denied her request — and state officials can’t quite get their stories straight as to why.
In June 2012, the state sent Chloe’s doctor a letter stating she “hadn’t met the requirement of taking older medications for 12 months.” The state’s medical director for Medicaid William Golden now says that the state couldn’t justify approving the drug because Chloe’s lung function was “normal at the time her doctors prescribed” it.
But based on statements and emails compiled by WSJ, it sure looks like cost was certainly a contributing factor. One state spokeswoman said:

Cost alone was not the determining factor, but how we will pay for it is something we must consider in advance as we are a state agency with limited funds.

Emails WSJ obtained from state officials show cost was a big factor in denying Chloe’s treatment, and could be an even bigger factor in the future:

In an email to colleagues discussing a review board’s deliberations about Kalydeco, a pharmacist named Pamela Ford wrote, “the consensus of the physicians on the board was that none of the prescribers would have a clue that this will cost AR Medicaid $303,408 per patient per year.”
She also noted in a separate email that Vertex was working on a new product that would combine Kalydeco with another drug, which could treat the majority of cystic fibrosis patients. The new therapy would be “likely even more expensive” and a “budget-breaker!” Ms. Ford wrote. “So we will be very strict in these reviews knowing it will come back even worse the next go-round.”

Deep within the WSJ story is also an admission from the state’s Medicaid medical director that some applicants have been approved for the drug in question — just not Chloe Jones. (In most countries, they would call this “health care rationing.”)
Chloe would be eligible to receive the drug under Medicare if she lives into her 60s; tragically, most cystic fibrosis patients die by the age of 40. Her doctor says they plan to apply for the drug again, now that Chloe has been taking the state-required drugs for a full year. Chloe’s doctor says that, if Chloe had been given Kalydeco in 2012, “we probably would’ve avoided most of the hospitalizations, if not all of them.” (She’s been hospitalized four times since 2013 due to her condition.)
I don’t intend to argue against cost savings or efficiency in Medicaid, or to suggest that Medicaid should pay for any drug at any time, regardless of cost. To the contrary: more efficiency and cost-saving measures would more appropriately distribute scarce resources allow for children like Chloe to receive the care they need. (Keep in mind: the government spent $14.4 billion in tax dollars on Medicaid fraud last year.) If there’s anyone who deserves to benefit from entitlement programs like Medicaid, it’s kids like Chloe.
Meanwhile, as Chloe waits for a panel of bureaucrats to scrape up some pennies for her treatment, taxpayers will shell out more than $1 billion this year for insurance for healthy, childless Arkansas Medicaid expansion enrollees. And unfortunately this problem will only get worse: Medicaid continues to wreak havoc on our state budget and, when the time for cutting comes, care for people like Chloe will be on the chopping block.