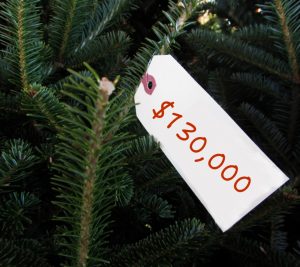 You may have heard that the Log Cabin Democrat (the local paper in Conway) subjected me to their journalistic fury not long ago for daring to question the city’s purchase of a $130,000 Christmas tree. I don’t wish to incur any more of their wrath, but after writing my stories and receiving feedback from folks from all over, I have learned a great deal about Christmas trees, Christmas decorations, and government operations in general. Here are a few things that stick out:

1. Cities waive competitive bidding way too often. Chances are, your city waives competitive bidding all the time. In fact, the city of Conway has waived bidding on 20 purchases this year — 8 in January alone. Some folks have argued that, due to the frequency with which Conway waives bidding, this makes the case of the Christmas tree a non-issue. However, in my view, it only serves to illuminate what I would call the routine or everyday quality of this scandal.

You also start to wonder why we even have competitive bidding requirements in Arkansas if they can be waived at will. I can think of some situations where waiving bidding might be reasonable. Say, for instance, the city’s main fire truck broke down. The city probably shouldn’t have a lengthy bidding process over this purchase because of legitimate public safety concerns (although they might already qualify for an exemption here under the “motor vehicles” section). However, suspending bidding on alarm systems, telephone systems, or tasers — all of which the city of Conway did in 2013 — is not good government practice.

Now, I want to be clear (I’ll type this extra slowly for those who are reading this article from the Log Cabin Democrat): the city is permitted under state law to waive bidding in “exceptional situations.” However, when a city is waiving bidding nearly twice a month, you start to wonder if all of these situations qualify as “exceptional.” Furthermore, as I’ve argued, waiving this process prevents transparency, opens the door for corruption, and costs taxpayers more dollars. On that note, the second thing I’ve learned is…

2. Conway taxpayers got ripped off. The city of Conway spent $130,000 for a Christmas tree and a service contract. Mayor Tab Townsell has argued that, since the tree has had extensive technical problems, the city was justified in spending this much money on the tree/service agreement. This strikes me as a highly unserious explanation — the kind you’d expect from someone who’s been spending other people’s money for way too long. (“Look what a terrible product this is: no wonder it cost so much!”) Nonetheless, that’s the mayor’s official position (until it changes). Interestingly, one Conway citizen did some research of his own into the cost of the tree: David Crow, a local government watchdog, actually called several companies that manufacture trees that are similar in size and features to the Conway tannenbaum. What Crow learned is that, had the city opened up the tree purchase for bidding, one manufacturer said they would’ve discounted the tree by as much as 40% back in August (when the original purchase was made). “He said his top of line tree is $150,000 and that was with everything possible on it. With a 40% discount, it would’ve been $90,000,” Crow said. Boy, didn’t we get a steal in Conway!

3. Conway taxpayers really got ripped off. You may know that the Secretary of State’s office decorates the state Capitol every year with lights, garlands, and yes, a big ol’ Christmas tree. But would you believe state taxpayers pay exactly $0 for the 25-foot cypress that’s on display in the rotunda? Granted that’s not nearly as cool as a half-lighted 54-foot Christmas tree, but hey, it’s free. According to Alex Reed, spokesperson for the Secretary of State, the tree — which is real, by the way — is donated by the Coles from Tom’s Christmas Tree Farm here in the state. To recap: that’s exactly $130,000 less than the city of Conway spent. And in fact, in decorating the entire state Capitol, the state has spent less than half what the city of Conway spent on one *@&$! Christmas tree.

(If I were a liberty-loving, smart-aleck blogger type — instead of being the soul of politeness that I am — I might point out here that the state of Arkansas taxpayers got a helluva lot better deal than city of Conway taxpayers and point out how this is a great example of how government spending is an awful substitute for private philanthropy and how government shouldn’t really be in the business of Christmas decorating, especially when it costs taxpayers tens of thousands of dollars. Instead, however, I will just invite you to look up the word “apophasis” and leave it at that.)

Look: if the city of Conway wants to purchase a reasonably-priced Christmas tree to dress up the downtown area, I suppose it’s not the end of the world (although it really should be done by a private entity). If that’s the city government’s decision, there are proper (and improper) ways for the city to go about doing that sort of thing: being considerate of taxpayers by allowing bidding and saving as many dollars as possible should be at the top of the city’s concerns. In this case (and apparently many others), best practices weren’t followed.

9 thoughts on “How Government Should Do Stuff With Christmas Trees”