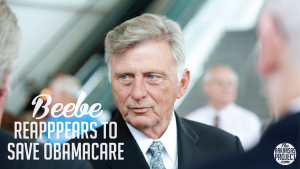 Mike Beebe reappeared earlier this week in an attempt to save Medicaid expansion in Arkansas — which was implemented through Obamacare under his tenure in 2013.

You can read his full statement here, explaining how the Graham-Cassidy legislation to partially repeal and replace Obamacare would be a “terrible bill” for Arkansas.

Asa Hutchinson supports the legislation, as do Sens.

Hutchinson has said the legislation would allow Arkansas to continue to cover the “Arkansas Works” Medicaid expansion population, while allowing states more flexibility to regulate insurance at the state level.

Beebe said in an interview with The Arkansas Project Wednesday afternoon that he opposed Graham-Cassidy, due to Arkansas receiving less federal dollars than it currently does under Obamacare.

I like flexibility so I agree with [Hutchinson] on that. I understand that he said it wouldn’t be the end of the program. That’s fine, but they’re taking the same amount of money that 31 states had received under expanded Medicaid and they’re giving it to all 50 without increasing any of the pot, which means we’re going to have a reduction in money. Some of our money would end up going to some of those states that did not expand Medicaid. I guess you could keep [Arkansas Works], but you’d have to keep it with significantly less money.

Of course, the problem with this statement is that it’s always a mistake for state-level politicians to assume that federal taxpayer dollars budgeted for a certain period are always going to be “our money” to spend. It’s not Congress’s job to favor a certain group of states over another. For example, California, New York and Massachusetts currently receive 37 percent of all Obamacare funding. This legislation is an attempt to make that funding more equitable across all 50 states.

I also asked Beebe about his claim that Arkansas has provided 320,000 Arkansans who were previously uninsured with health insurance.

Regardless of how many Arkansans are now on Medicaid, it’s an open question whether it’s done much to improve the healthiness of Arkansans. Arkansas still ranks as the 48th healthiest state in the nation, according to a 2017 study by United HealthCare. Notably, Beebe’s statement contained no discussion of Medicaid expansion’s health effects. (As we have discussed before, there is substantial uncertainty about whether Medicaid expansion makes people healthier.)
It looks like all that money pouring in from the federal government hasn’t done much to improve the health of Arkansas residents.