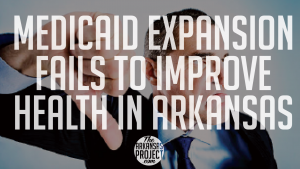 Former President Bill Clinton praised Arkansas’s Medicaid expansion program earlier this week, but has the program actually improved the health of Arkansans?
It looks like the answer is: no, it hasn’t — according to a recent study by the United Health Foundation.

According to the study, Arkansas’s 2016 health ranking has remained virtually unchanged since 2015 (we’re 48th in the nation!), despite putting over 300,000 Arkansans on a new Medicaid expansion program.

The study noted that in “the past five years, the percentage of the population without health insurance decreased 43% from 18.9% to 10.7%.”
One might think this would improve Arkansas’s ranking, but it hasn’t — perhaps because some of our state’s biggest health challenges stem from some of our citizens’ unhealthy lifestyle choices.

All but one of the states surrounding Arkansas that decided against expanding Medicaid finished ahead of Arkansas in the overall healthiness ranking. The lone exception was Mississippi, which finished in last place in the nation.

We appreciate that some people believe that social problems (such as poor health) will be improved when government throws money at them — and so, the theory goes, you can produce a rough measure of social progress by calculating the amount of taxpayer money spent on it. We also appreciate that this theory is often terribly wrong.

You can read the entire study here.