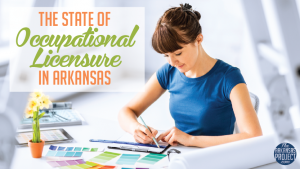 It’s no secret that Arkansas doesn’t live up to its “Land Of Opportunity” nickname — especially when it comes to how state government regulates who can work in certain occupations.

A recent study released by the Mercatus Center and the Arkansas Center for Research in Economics (ACRE) examines the status quo of occupational licensing in Arkansas, who benefits and who loses under such regulations, and how the current regulatory morass can be reformed.

The study begins by examining how Arkansas fares against other states’ occupational licensing structures. The verdict: not very well. A 2007 study by the Reason Foundation ranked Arkansas fifth in the nation — meaning that when we look at the number of occupations that require a license as a prerequisite for employment, Arkansas regulates workers more than 90 percent of the states do. A 2012 study by the Institute for Justice also found that Arkansas was the “fifth most broadly and onerously licensed state” in the nation.

Arkansas licenses several rarely licensed occupations like plant nursery worker, funeral attendant, psychiatric technician, drywall installer, and landscape contractor. Yet instead of producing higher-quality drywall work or safer landscaping operations, licensing requirements typically keep out those who cannot afford to clear the hurdles, thereby shielding existing industry members from competition. This disproportionately impacts poorer and less-educated Arkansans who could have otherwise expanded availability of services. Low-income consumers lose in particular. In the absence of licensure, a barber, for example, might offer lower-quality yet steeply discounted haircuts to those who would otherwise not be able to afford to go to expensive or luxurious shops.

The typical response by opponents of reform tend to center around health and safety concerns. But consider that, in Arkansas, you can begin working as an emergency medical technician (EMT) after 28 days of education/experience, while obtaining a makeup artistry license requires 140 days of education/experience. This suggests that health and safety aren’t the only concerns — especially because these occupational licensure regulations are created by state boards and commissions responsible for regulating various industries in Arkansas.

Mercatus and ACRE researchers ended their observations by outlining ways state legislators can begin rolling back occupational licensing in Arkansas.

While it’s true that most of these recommendations have been tried through the legislative process and failed in recent years, legislators should still keep trying. Many states have already succeeded in substantial reform efforts. If Arkansas stands pat on this issue for years to come, Arkansas workers will pay more in training costs and Arkansas consumers will pay more in higher prices.

You can read the full study by Mercatus and ACRE researchers here.

One thought on “The State Of Occupational Licensure In Arkansas”