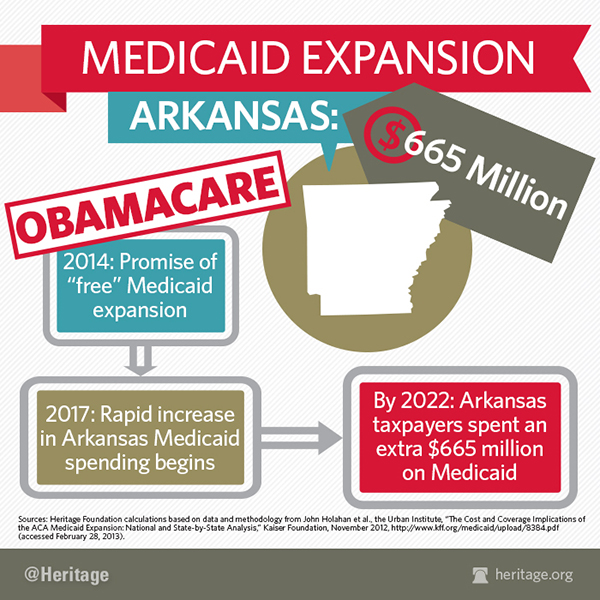 Advance Arkansas Institute President Dan Greenberg was recently asked to summarize the battle over Medicaid reform for The Heritage Foundation. His piece is on their blog, The Foundry. Here’s a taste:

In plain English, the maneuver Arkansas was contemplating would gain the state no additional flexibility on benefits or cost sharing beyond the (very limited) scope allowed under current federal Medicaid rules.

Thus, the notion that the “private option” could somehow produce significantly lower costs and better patient outcomes relative to traditional Medicaid became highly doubtful. At best, it would simply be a variant on the existing and common strategy of states contracting with private managed care companies to deliver Medicaid benefits. Yet, while the policy differences were vanishingly small, to the point of nonexistent, the rhetorical shift was enough for the pro-expansion forces to eke out a win in the end. Given that, it is worth deconstructing the rhetoric offered in support of the Arkansas plan.

You can catch the full piece at The Foundry.

In other news, former congressman and gubernatorial candidate Asa Hutchinson made an appearance at the Columbia County Reagan Day Dinner last week. In his remarks, he addressed the “private option” Medicaid expansion. Unfortunately, he described it as “the mandate to expand Medicaid.” The problem is that no mandate existed, despite what some lawmakers and the governor may have wanted Arkansans to believe: a key component of the Roberts ruling on Obamacare specifically said that states had the choice of whether or not to expand their Medicaid programs under the Affordable Care Act. Perhaps, much like some legislators, Hutchinson may want to believe that there was a mandate for expansion in Arkansas, but it’s hard to see the evidence for it. Arkansas has expanded Medicaid under Obamacare and moved forward with implementing a state Obamacare exchange. Many grassroots conservatives found these policy choices disturbing and mystifying.

Hutchinson also said that it’s time for opponents of the “private” option to “move on.” I can certainly understand why he would say that — Republicans don’t really want to be attached to Obamacare going into the next election cycle. But again, no amount of rhetoric will change reality: the first GOP majority since Reconstruction has implemented Obamacare and expanded Medicaid. I don’t like this reality and I don’t want to live in it either, but it’s where we are.

Additionally, it’s remarkable to hear a major figurehead in the GOP telling reasonable opponents of Obamacare that they should “move on.” As George Santayana famously said, “Those who cannot remember the past are condemned to repeat it.” The call to “move on” seems to imply that we need to stop talking about the battle over Medicaid expansion — that we shouldn’t remember the legislators who were so vehement in their attacks on Obamacare during their campaigns, but who made very different choices once they were safely ensconced in office.

Indeed I think there were many lessons learned throughout the expansion debate, and Arkansans should not quickly forget them.