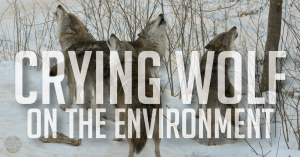 In the past, I have compared occasional op-ed writer Richard Mason to the Lorax, a character from Dr. Seuss who supposedly speaks for the trees. Just having read Mr. Mason’s most recent Democrat-Gazette op-ed, I think he’s more like another literary character – the boy who cried wolf.

You remember him, I’m sure. He liked to call out that a wolf was nearby to alarm people for his own amusement. While the boy who cried wolf knew he wasn’t telling the truth, I don’t think that Mr. Mason is being dishonest in his alarmist rhetoric about the environment. I think he earnestly believes what he writes. It’s just that what he doesn’t bother to research or to check the facts before he writes.

This is evident in his open letter to Rep. French Hill attacking him for his support of legislation to remove gray wolves from the Endangered Species List. Currently, some populations of gray wolves in the lower-48 states are listed as endangered species. But other populations have already been de-listed. The U.S. Fish and Wildlife Service has been trying to de-list other populations because they have sufficiently recovered, but these efforts have been tied up in court. The legislation supported by Rep. Hill would resolve these disputes and de-list the species.

According to Mr. Mason, removing gray wolves from the Endangered Species List will inevitably lead to them being slaughtered and exterminated. Too bad his vision of the wolves’ future bears no relationship to reality, nor do his views on how wolves are currently managed have any grounding in fact.

He makes many absurd claims throughout his op-ed:

“By your actions you have created an environment that will give the Alaska helicopter wolf-hunting boys and the Montana folks with the motto of ‘The only good wolf is a dead wolf’ open season to eliminate the gray wolf from the United States.”

“Removing the gray wolf from the protected list will let individuals shoot any wolf they see on their property even if it poses no threat to livestock or humans.”

Another absolute falsehood. As mentioned above, gray wolf populations in some states (such as Alaska, Montana, and Idaho) have either never been under the protection of the Endangered Species Act or have been de-listed as endangered species. In these states, individuals can no more shoot gray wolves with impunity than they can shoot elk or moose. The states set regulations for hunting or trapping wolves, just as they do with other animals. Having a wolf on your property does not entitle you to kill it any more than having a deer on your property allows you to kill it. To do so, a hunter or trapper must obtain a license from the state and follow the state’s rules and regulations.

“The only reason the gray wolf exists now is because it is on the Endangered Species List… Congressman, how do you sleep at night knowing that you will be a party to exterminating a species?”

Mr. Mason then moves to other environmental complaints. They are equally as misinformed as his views on wolves. One of them involves a forestry bill sponsored by Rep. Bruce Westerman. I’ve dealt with Mr. Mason’s misconceptions about this bill elsewhere on TAP. Apparently, he failed to read my blog post, since he continues to be confused about the role of national forests:

“… as our national forests and the Arctic National Wildlife Refuge are opened for exploration and timber harvesting, it seems the goal is to make money at any cost, and America’s wildlife and forests are expendable if they are in the way of making a dollar.”

There is certainly a debate to be had over the proper government management of wildlife and forestland. However, such a debate must be informed by facts. Too often, people fail to research what legislation actually does or how the government’s environmental or land management programs actually work. They assume things, read a brief article about some proposal, and then get upset. Some, like Mr. Mason, then write an op-ed full of misinformation and outright falsehoods. This last step is especially troubling because other people read his words and think that they must be correct. After all, wouldn’t a newspaper do some rudimentary fact-checking before publishing an op-ed?

Clearly, the Democrat-Gazette does not fact-check op-eds. As Mr. Mason’s submission shows, the paper seems to allow anyone to assert easily debunked falsehoods as long as these falsehoods are presented to support an opinion. The Democrat-Gazette can do what it wants, but this policy just leaves it up to other sources, such as TAP, to confront people like Mr. Mason when they cry “wolf” on environmental issues.