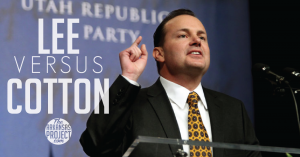 The lame duck session of Congress is underway. One of the bills under consideration would reform the federal criminal justice system. While we may think that Democrats and Republicans line up on different sides of most issues, on this bill it’s Republicans vs. Republicans. Specifically, it’s Senator Tom Cotton against a lot of fellow Republicans.

One of the colleagues with whom Sen. Cotton has a disagreement is Sen. Mike Lee, a Republican representing Utah. Sen. Lee is a strong supporter of the First Step Act, legislation to reduce the severity of some federal prison sentences and encourage recidivism and rehabilitation (I wrote about it on a previous TAP post). As a former prosecutor, it is difficult to see how anyone can argue that Sen. Lee is soft on crime or likes to coddle criminals.

In a recent article published by National Review, Sen. Lee disputes that:

… the bill categorically excludes offenders convicted of certain crimes and provides that all other offenders are eligible to earn credits only if they are deemed a minimum or low recidivism risk. Cotton dislikes this system because it reflects too much “faith that government bureaucrats can judge the state of a felon’s soul” and is subject to manipulation by a future Democratic president.

But the legislation doesn’t ask “government bureaucrats” to “judge the state of a felon’s soul.” Rather, it directs experienced law-enforcement officers to determine whether an offender is a danger — a job they already do daily, in order to run the nation’s federal prisons. Similar risk assessments have already been implemented in Texas and Georgia, and these states are hardly the post-apocalyptic criminal hellscapes that Cotton predicts such a system would cause.

Arkansans should check out both the article by Sen. Cotton and the rebuttal by Sen. Lee. Both raise good points, with Sen. Cotton indicating that Congress should pursue other forms of criminal justice reform: “adding a mens rea requirement for all crimes, reducing the size of the criminal code, and limiting federal power over our lives.” All those are good ideas, and it would be nice to see further bipartisan cooperation on achieving these goals.

The First Step Act has support from President Donald Trump, a bipartisan group in Congress, and a variety of both conservative and liberal organizations. Sen. Cotton is doing all he can to stop it from passing in the lame duck session, and he may succeed. If he does, however, it is likely that whatever criminal justice reform bill emerges in the Democrat-controlled House of Representatives next year will be even less to his liking.