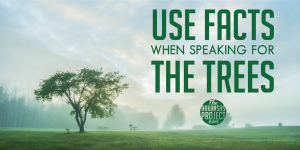 If you listen to Richard Mason, you’d think that Bruce Westerman is little better than the Once-ler. You remember the Once-ler, right? He’s the villain in The Lorax by Dr. Seuss, cutting down all the Truffula trees until the world enters an environmental apocalypse.

The Lorax is an OK book (of the Seuss catalog, I prefer Marvin K. Mooney, Will You Please Go Now!), but it bears little relation to the real world. That’s similar to the op-ed written by Richard Mason in the El Dorado News-Times. Like Seuss, he describes a cartoonish world of environmental destruction. His op-ed is about as factual as The Lorax.

The real focus of Mr. Mason’s ire is Rep. Westerman’s “Resilient Federal Forests Act.” I have discussed this proposal a few times on TAP. It is a commonsense bill that makes it easier to harvest timber on federal land controlled by the Forest Service and the Bureau of Land Management in order to prevent wildfires.

For Mr. Mason, however, this bill is linked to a variety of other actions taken by President Trump that supposedly threaten our planet. Since this is an Arkansas-based blog, we’ll leave those complaints aside for now and just focus on Rep. Westerman’s bill. Mr. Mason gives us plenty of things to discuss about it.

First, take his claim that this bill will “will open the doors to more logging, gut the environment safeguards and loosen public input into the timber harvesting in our national parks.” That is 100% false. Logging is banned in national parks. It will remain so under this legislation. Instead, this bill will only affect land controlled, as mentioned above, by the Forest Service and the Bureau of Land Management.

The federal government owns vast amounts of land, especially in the western part of the U.S. There are different designations for different areas the government owns. Some of the land is national parks, such as Yellowstone and Yosemite. There is no logging, mining, oil and gas drilling, hunting, or a number of other activities. Then there is wilderness, which also has severe limits on human activity. National forests, on the other hand, were established with the primary purpose of allowing timber harvesting. That has changed over the years, but logging is still one of the allowed activities on Forest Service land. That is why the Department of Agriculture manages it, not the Department of the Interior.

The general public may not recognize these distinctions, but Mr. Mason holds himself out to be an environmental expert. When he talks about this legislation allowing logging on national park land, he is misleading the public into believing that Yellowstone National Park could be logged. That just isn’t true. The land covered by this bill is already open to timber harvesting activities. As I have described in past TAP posts, there is significant red tape that governs timber harvesting on this land. Rep. Westerman’s bill would merely loosen that red tape in certain circumstances to decrease the chance of wildfires. It would not, as Mr. Mason claims, give timber companies a “blank check” to do whatever they want on this land.

If you read Mr. Mason’s entire op-ed, you see that this tendency to ignore the facts and play up the hysteria is replete throughout it. For instance, he says that Republicans “are planning to open up the national forests to coal mining and oil and gas well drilling.” Anyone who is familiar with the national forest system should know that it is already permissible to mine as well as produce oil and natural gas in our national forests. These activities have been allowed there for over 100 years.

Or take this claim: “our air and water is steadily becoming more polluted.” Nope — as the EPA reports, our nation’s air is getting cleaner.

Environmental hysteria makes for a good read, whether it’s an op-ed in the News-Times or a Dr. Seuss book. But policymaking should not be based on the groundless claims that make up this hysteria. Rep. Westerman is not the Once-ler and his bill will not lead to environmental catastrophe. It has already passed the House of Representatives. Let’s hope that when senators consider this bill, they have a better grasp of the facts about federal land policy and environmental issues than does Richard Mason.