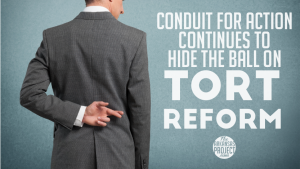 When you say you support tort reform in principle, but you fail to support a practical proposal to enact that reform, are you really a supporter? That is what we must ask about Conduit for Action. As I have written about earlier this week, that organization says it supports tort reform, but its actions may lead one to question whether this “support” is anything more than empty posturing.

One example of this is the organization’s opposition to SJR 8 on its legislative scorecard. SJR 8 is a constitutional amendment that, if approved by Arkansas voters, would give the legislature power to enact tort reform and impose limits on contingency fees.

Conduit for Action starts with its usual boilerplate language saying it is an “advocate for tort reform,” then goes on to advocate against tort reform by making a series of objection to this bill. Among those objections is that the amendment gives the legislature new powers over the judiciary. These powers are not really new, since the General Assembly had those powers prior to 2002. They are also the same powers that roughly half of the legislatures in other states have, as well as powers that are possessed by Congress.

A related objection is that this proposal “combines power into one or two branches of government which is very ill-advised.” I’m not sure what that means. It appears to be an objection to checks-and-balances between branches. Currently, the Arkansas Supreme Court has sole authority to decide on these matters. Restoring that power to the General Assembly will remove the unilateral authority from one branch of government and divide it among two branches. Allowing one branch to check another branch’s power and to balance that power is something that is at the root of our constitutional system of government. In fact, Conduit’s position is that it prefers to keep rulemaking power confined into one branch of government, rather than being shared by two branches of government. As a matter of substance, this position of Conduit’s is directly contrary to classic conservative values of limited-government constitutionalism.

Another objection raised by Conduit for Action is that SJR 8 limits contingency fees. Conduit for Action contends that this interferes with freedom of contract, omitting the fact that fiduciaries, such as attorneys, have never been properly understood to possess full freedom of contract with their clients. Attorneys have a fiduciary responsibility to their clients; they are supposed to look out for their clients’ best interests. However, in some circumstances a lawyer may neglect that obligation (and thus commit an ethical violation) in order to further the attorney’s interests. I wrote a blog post about this issue a few months ago, but it may be useful to revisit this issue briefly here.

Even though attorneys are required to further the interests of their clients, they may be tempted to act in a way that brings more benefits to them than to the clients they represent. A contingency fee arrangement can make this temptation even worse. As I wrote about in my previous blog post:

An agreement between an attorney and a client isn’t like an agreement between two equals — the client has taken the attorney into his or her confidence; the client has likely disclosed his or her economic circumstances to the attorney; the client is entitled to rely on the attorney to respect the client’s best interests. Preventing lawyers from taking (for instance) half the value of their clients’ lawsuits for themselves is a consumer protection measure that blocks self-dealing: it’s a method of enforcing ethical rules against lawyers who behave unscrupulously.

This problem is not only apparent in the lawyer-client relationship, it also occurs in other professional situations. State law recognizes the problems that contingency fees may hold for lobbyists and doctors, for instance. That is why the law prohibits these two professions from charging contingency fees. There is no violation of free market principles if we place limits on contingency fees for lawyers, too.

It is absurd to say, as Conduit for Action does, that current law is sufficient to deal with abuses of the system. Current law only caps “unreasonable” contingency fees, which is rarely enforced. What if we had a law that merely said that taxes shall not be “unreasonable”? Does anyone think that would be a workable way to limit taxes? Of course not.

Once again, it seems obvious that Conduit’s objections to tort reform fail to stand up under scrutiny. In practice, Conduit has chosen the trial-lawyer perspective on tort reform — and, unsurprisingly, their arguments for this position seem very weak.

(I suppose it bears repeating that I have contacted Conduit in order to get their perspective on tort reform. They replied back to the effect that they would answer my questions, as long as I supplied them in written form. Oddly, even though I sent them several questions, they have not yet answered them.)