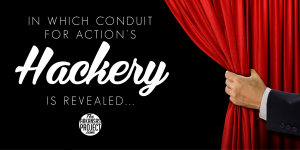 Through a series of blog posts last week, I believe I have shown that Conduit for Action has a long history of giving lip service to tort reform — but does its best to sabotage tort reform in practice. It’s a strange position for an organization that supposedly stands for conservative values and claims to be an advocate for small businesses. It is reasonable to call Conduit’s actions in this realm unprincipled.

Conduit for Action is 100% right when it says this on its website about tort reform:

That laudable statement does not seem to be translated into action, however. When legislators proposed a constitutional amendment that would address the small business problems that so concerned Conduit, the organization used every rhetorical trick in the hack’s handbook to oppose that amendment. Then, apparently to save face, the organization threw its support behind a meaningless measure that would not do anything to reform the problems with Arkansas’s tort system.

Conduit is free to advocate for or against tort reform. The organization is free to criticize tort reform efforts that it thinks are flawed. However, when they display a pattern of rhetorical support for tort reform and substantive opposition to it, it is easy to wonder where the organization’s principles lie.

Perhaps Conduit is not unprincipled, but merely misinformed on this issue. Tort reform can be a complicated issue, and people make mistakes or have misguided impressions on policy all the time. I contacted Conduit for Action with some questions to clarify the organization’s position on tort reform. Someone from Conduit emailed me back to say that they would “be willing to answer” my questions if I e-mailed them (oddly, the email was signed organizationally — “Conduit for Action” — not personally), which I did, but I have never heard back since.

I guess I should close by recounting another episode that demonstrates Conduit’s response to criticism. A few weeks ago, Conduit put up a Facebook post about the Arkansas judiciary, in which it explained that “the role of the Judicial branch is to apply and interpret the law, but NOT to make the law.” I doubt that Dan Greenberg, the former president of the Advance Arkansas Institute, was the only person to notice that this noble sentiment directly contradicts Conduit’s position on tort reform. (More precisely, Conduit’s position is that — when it comes to rulemaking for the judiciary — the proper role of the judicial branch is, quite simply, to make the law.) However, Greenberg may have been the only person who possessed the time and the inclination to respond to Conduit’s Facebook post — by explaining in a comment just below it that people who do not believe that the judiciary should make the law should be logically impelled to support SJR 8, which Conduit opposes.

Here’s Conduit’s response, which Greenberg forwarded me. He said he found it amusing. I, however, found it depressing.

Greenberg told me that he then replied again — to the effect that Conduit either had misunderstood or misdescribed the issue. After all, as he then explained, when we say that the judiciary isn’t supposed to make new law, what we mean is that courts aren’t supposed to be in the business of manufacturing general rules. Rules are a kind of law. Each law is a kind of rule. Again, the judiciary isn’t supposed to make laws, and the notion that judicial rulemaking should somehow be exempt from this general principle is a pretty silly argument — but, when it comes to tort reform, pretty silly arguments are used by Conduit in abundance.

That was demonstrated by Conduit’s final response. I wanted to double-check Greenberg’s version of the conversation, so I immediately went to Facebook to look at the comments section of the relevant post. I was disappointed to find that someone at Conduit had become so incensed by the comments on that post that they had apparently decided to delete all of them. (I believe that the kids these days call such an action a “ragequit.”) In other words, the response to Greenberg’s arguments was something like the response of a government functionary in a totalitarian society when confronted with a politically embarrassing incident: the incident was resolved by Conduit’s decision to destroy all the evidence.

As I noted previously, when Conduit is asked questions about what it’s doing, their response is typically to give the questioner what is known as “the silent treatment.” This refusal to engage is risky for several reasons — one risk is that it may supply undue weight to what Conduit says on the rare occasions when Conduit does respond to questions. I look at that evidence, and I have to conclude that there is, most definitely, some hackery going on. Indeed, there is one party in the debate over tort reform that has (as described above) repeatedly gotten the facts wrong, made misleading arguments, relied on personal attacks, supported sham proposals for what appear to be the worst kind of strategic reasons, and in general has failed to behave in an intellectually or morally principled way on this issue. Yes, the debate over tort reform demonstrates a fair amount of hackery. But I suspect that any reader who has gotten this far would have to agree that Conduit for Action has done a terrible job at identifying the guilty party. My personal view is that only a hack would loudly proclaim allegiance to tort reform and yet devise excuse after excuse to justify opposing the only real tort reform proposals being put forward.