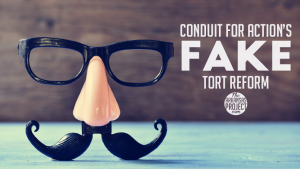 This week I’ve been writing about Conduit for Action’s continued attacks on tort reform. This odd phenomenon is especially notable for two reasons, because Conduit for Action regularly carries out two activities: Conduit not only professes an attachment to the Republican platform and standing up for small businesses, but also criticizes others when (in Conduit’s judgment) others’ attachment to Republican policies isn’t pure enough in Conduit’s judgment. Today I’ll look at the type of tort reform that Conduit supported earlier this year – SJR 13. Examining SJR 13 closely makes it clear that supporting this proposal — in principle and in practice — was just about the same as not supporting tort reform at all. Support of SJR 13 merely gave Conduit cover to continue its sabotage of real tort reform efforts in Arkansas.

The introduction of SJR 13 occurred earlier this year, during this year’s legislative session. Its sponsors touted it as an alternative to SJR 8, another tort reform amendment. But was it a real alternative? SJR 8 had substantial reform measures, such as limiting contingency fees, limiting non-economic damages, and allowing the legislature to enact further reform. SJR 8 also had 66 co-sponsors, in addition to its two main sponsors.

That measure was the real deal. SJR 13 (as outlined below) did not contain real reform. It appears that its two sponsors put it forward to give cover to legislators who merely wanted to give lip service to tort reform. The fact that, besides its two sponsors, SJR 13 garnered only one other co-sponsor suggests that most policymakers didn’t take it very seriously.

SJR 13 would have enacted two meaningless bits of “reform” that would have little to no practical effect. The first bit would have modified Arkansas’s existing “loser pays” system in such a way as to apply to a minimal number of cases per year (probably around 2 or 3). The second bit would have allowed caps for non-economic damages, but the floor for those caps would have been set so high that they would have no impact in the real world. I discussed this issue in detail in a blog post earlier this year, but it’s useful to reprise some of that information here.

The “loser pays” part of SJR 13 sounded reasonable. However, sounding reasonable and actually being reasonable are two different things. Under SJR 13, the only time that the reimbursement would ever have taken place is if a lawyer makes an argument that is (1) not grounded in law or fact, (2) not warranted by existing law, or (3) made for an improper purpose.

Such arguments are already prohibited under what’s called “Rule 11,” which allows lawyers to be sanctioned for lying about the law or the facts of the case, or making an argument that is legally insupportable. Given the scarcity of courts enforcing Rule 11 sanctions now (and these sanctions are exceptionally rare in Arkansas, with roughly two such sanctions handed down every year), it makes little sense to enact this standard for a second time. It is one of those things that sounds nice, but has little actual effect. I want to be fair to Conduit here — I suppose one could argue that you’d see more fee-shifting if we decided that it should be mandatory upon a Rule 11 violation, rather than permissive as it is now — but it seems just as likely that the chief effect of SJR 13’s proposed change in this area would be to lessen the number of times that courts determine that Rule 11 has been violated.

SJR 13’s other major change dealt with limiting punitive damages. Again, this appeared reasonable on the surface. Punitive damages, which are designed to punish wrongdoers and typically are a multiplier of the actual damages suffered, should not be so high as to be outrageous. But, as with the “loser pays” section, SJR 13 had a catch — it said that the legislature could put a ceiling on punitive damages, but it also required a floor: the ceiling could be no smaller than five times actual damages.

Why was that a problem? Dan Greenberg explained:

It all goes back to a case that that United States Supreme Court decided about 14 years ago, State Farm vs. Campbell. In that case, the Supreme Court found that punitive damage awards that are four times the size of the actual damages are “close to the line of constitutional impropriety.”
…if you get much bigger than four times punitive damages, you’ve gone over the line into unconstitutionality. The Court basically thinks that once you start multiplying damages too much – when you go somewhere a little north of (but pretty close to) a four-times multiplier, then you’re not treating the defendant fairly. Once you produce punitive damages that are the result of factors that are a little bigger than four times, the Supreme Court will strike them down.

SJR 13 set a limit on punitive damages that is far higher than the typical multiplier used for punitive damages. It set this limit so high that it exceeds what the Supreme Court has already ruled is close to being illegal. This cap could have conceivably affected a few cases, but in reality, it would have been used so rarely that this provision of SJR 13 was essentially meaningless.

In short, here is the bottom line: SJR 13 was a proposed constitutional amendment that would have changed little or nothing. SJR 13’s main purpose appeared to be to give cover to those who want to say they support tort reform — without actually achieving anything of substance.

That is a common political tactic. Many times liberals will try to co-opt conservative policy positions by putting forth legislation that seems designed to achieve the same goals, but in reality is just empty posturing. That way, liberal politicians can say they support a conservative policy without actually doing so in reality.

For example, there was recently a vote in the U.S. Senate on an amendment to the congressional budget resolution that would only allow a tax cut that does not increase the federal deficit. While that sounds nice on its face, that vote was a political ploy to give cover to Democrats who oppose tax cuts. They know that no tax cuts could meet the conditions laid out in the amendment, but it gives them cover to say, “We support tax cuts, but they must be deficit-neutral.”
That type of unprincipled political gamesmanship is all too similar to what happened with SJR 13. Conduit for Action and other opponents of tort reform tried to use it as a shield — to fend off the accurate criticism that they were opposing meaningful tort reform. They hoped that the public would only look at the surface of the proposal, but that the public would fail to understand its (at best, microscopic) real-world effects. The people should not be fooled, however. Supporting SJR 13 was an unprincipled way to pretend to support tort reform. In reality, support of SJR 13 was a direct attack on SJR 8, because SJR 8 was a widely-supported consensus proposal for real tort reform.