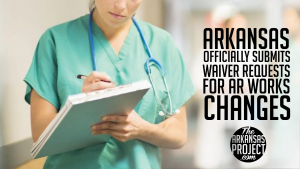 The waiver includes changes passed by Arkansas lawmakers during a special session in May.

Those changes include reducing access to the program to those making less than 100 percent of the federal poverty level and establishing a work requirement for some enrollees.

Currently, Arkansans making 138 percent of the federal poverty level are eligible for the program. Also, enrollees are currently subject to a “work referral,” for which they receive a letter from the state detailing ways to contact the Department of Workforce Services (DWS).

Hutchinson said in May that 97 percent of enrollees who receive such a letter don’t access DWS services.

The change I propose and the waiver I request is that people who are healthy, younger of 50 years of age, and don’t have dependent children then a requirement should be placed on them that they need to be holding a job, be in worker training, finish their education, complete community service or seek treatment to addictions to alcohol or drugs. These are good things that all of these services we provide that they can access.

An Arkansas Department of Human Services spokeswoman told the Associated Press she expected a response back from the federal government by 90 days.

A request for comment from The Arkansas Project to a Health and Human Services spokesman wasn’t returned by deadline Friday.

Enrollment in “Arkansas Works” is currently at approximately 330,000. That’s far higher than the original enrollment projections of 215,000 when the program was created in 2013.

While the changes wouldn’t go as far as the Medicaid expansion enrollment freeze passed by the Ohio legislature this week, the changes requested by Hutchinson would be a good first step in getting the program’s skyrocketing enrollment under control.