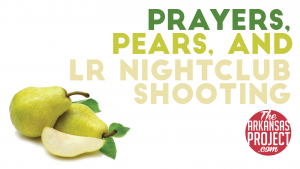 Could prayers ever be a justifiable response to a shooting at a Little Rock nightclub that left 28 injured Saturday morning?
Both U.S. Sens.

Tom Cotton and John Boozman mentioned the need for prayer after the shooting occurred. However, State Rep.

Greg Leding of Fayetteville tweeted Saturday that when people talk about “thoughts and prayers” in difficult times, that we might as well hear it as someone talking about “apricots and pears.”
Leding probably could have been more diplomatic and less incendiary on Twitter. Some people who devote their thoughts and prayers to the betterment of others are pretty serious about it.

Leding followed up this proclamation by saying he meant faith without works is meaningless.

Unfortunately, considering Leding’s well-documented voting history, I assume we’re going to disagree on what actually needs to be done after the shooting spree occurred.

It should be surprising to no one that the mass shooting Saturday morning at a nightclub in Little Rock is being used to push further restrictions on the Second Amendment in Arkansas.

That seems to be the way Leding and some of his fellow Democrats in Arkansas want to go.

Charles Blake got more specific when he said he was drafting legislation to file in the next legislative session that would put limits and restrictions on ammunition usage.

This solution would be worse than “apricots and pears,” or doing nothing, because it would restrict the Second Amendment rights of law-abiding Arkansans while doing little to reduce crime.

No arrests have been made as of yet relating to the shooting Saturday, but you can bet the perpetrators weren’t too concerned with following state gun laws before committing the shooting.

The only arrests made so far in the shooting include Ricky “Finese 2 Tymes” Hampton. He was arrested on outstanding warrants out of Forrest City for aggravated assault charges. Kentrell Gwynn, one of Hampton’s companions, was also arrested in Alabama. Authorities recovered two handguns and an AK-47 from Hampton’s vehicle.

I’m sure more information will come out soon about whether these two were involved in the Little Rock shooting.

Hampton was the featured rapper for the show at Power Ultra Lounge Saturday when the shooting occurred. I think it’s fair to ask why he was allowed to headline a well-publicized show when warrants were already out for his arrest.

It’s possible that this whole incident was completely avoidable. Legislators should pause after such tragedies before advocating policies that would harm law-abiding Arkansans without deterring crime. Some people might even believe that prayerful consideration of what to do in such a situation might provide some insight into thorny legislative problems.