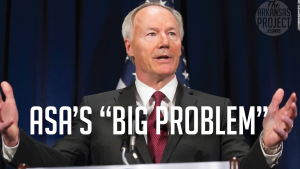 Arkansas has a “big problem” on the horizon if the Senate’s Better Care Reconciliation Act becomes law, according to Gov. Asa Hutchinson.

Hutchinson said the bill does some “good things” such as reducing costs, cutting the deficit, and providing more options for the state to run its Medicaid program.

However, Hutchinson lamented that states like Arkansas, which expanded Medicaid through Obamacare, would be required to start picking up more of the tab in 2020.

The big problem is that the Senate bill does continue to shift costs to the states and that leaves states like Arkansas with few choices. Arkansas, as you know, prior to my election as Governor made a decision to expand coverage of the Medicaid population. That expansion was based on a federal commitment, but the Senate bill reduces that federal commitment from the 90 percent level of federal participation down to the traditional Medicaid reimbursement rate. That is a dramatic shift of federal participation in the Medicaid program. When the reimbursement rate is reduced, the state has got difficult choices to face. We either have to reduce the expanded Medicaid coverage or we have to cut costs in the traditional Medicaid program…that includes children, elderly or people with disabilities. Or it could be a combination of both. Or we can increase taxes.

We are not raising taxes so the result is the Medicaid coverage would be reduced if the Senate version was adopted. If in 2020 the expanded Medicaid coverage is reduced by the federal participation down from 90 percent to 67 percent, the state of Arkansas could not absorb that additional investment that would be required to maintain the coverage for 300,000 Arkansans. We would have to make dramatic changes based upon that reduced federal participation.

When Arkansas legislators and Gov. Mike Beebe created the “private option” Medicaid expansion program in 2013, the federal government was committed to picking up 100 percent of the costs — with an eventual reduction to 90 percent in 2020.

The problem with the commitment that Hutchinson cited in his comments today is that “commitments” are only as good as the entity you’re making the commitment with.

In this case, said entity is the United States federal government — which is trillions of dollars in debt. Not exactly the most fiscally responsible organization to be relying on to balance the state budget every year.

Many opponents of the “private option” program made this same point when the program was being debated in 2013. These opponents were ignored; the program was implemented with a trigger that was put into the law to end the program — if the federal government’s match rate was ever reduced below the agreed upon 90 percent. However, there’s still some concern about whether Arkansas could ever actually end its Medicaid expansion program without risking all Medicaid funds for the disabled and elderly.

Fast forward to 2017: it looks like this prediction from Medicaid expansion opponents about the unreliability of promises from the federal government is becoming more of a reality for Hutchinson and the state of Arkansas.

Neither U.S. Sen. Tom Cotton nor John Boozman have taken an official position for or against the Senate bill so far. Senate Republicans are still engaging in intra-party negotiations to whip up enough support for the legislation.

Regardless of whether it passes or not, I doubt this is the last we’ll hear about the federal lawmakers attempting to reduce the amount of federal “free money” flowing to states that expanded Medicaid.