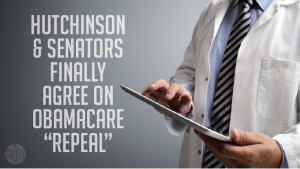 It’s taken approximately half a year of trying, but has the Senate finally found an Obamacare repeal and replace bill they can pass?
The answer to that question will have to wait until next week. However, it looks like both of Arkansas’s Senators and Gov.

Asa Hutchinson are supportive of the legislation.

It repeals the individual mandate and employer mandate…which is important. It also block grants to the states the federal funds that are currently utilized, but it does it in a way that is more equitably distributed and does not represent a cost-shift to the states. It allows us to continue the progress in health care coverage that we can be successful in as a state.

Tom Cotton and John Boozman said they plan on supporting the legislation when it is voted on next week.

I believe it would be a vast improvement on Obamacare. My governor, Asa Hutchinson, says he supports it as well. I think it’s usually a good thing when we can give more power, autonomy and flexibility back to our state governments. I have faith that our governor and our state legislature will make the right decision, whether that’s now or 10 years from now. We’re having ongoing discussions about whether we can find the votes for that legislation, but it’s going to be better than Obamacare, I know that much.

Senator Boozman supports the Graham-Cassidy bill because it provides flexibility to the states, empowering Arkansas to choose the best method to meet the health care needs of its citizens. It also repeals the individual and employer mandates that have harmed families and business owners.

The Senate’s most recent attempt at Obamacare repeal was one vote short of passage. It will be interesting to see what the outcome of this latest version of health care legislation when it is voted on in the Senate next week.