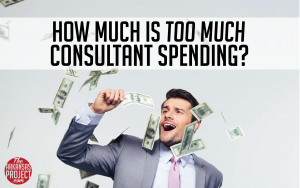 The Arkansas Legislature recently hired two consultants to work on procurement and tax reform. The hourly rates are sky-high. We’re flying in people from all over the country to give “advice” to state government. Is this the place to save money in Arkansas?

Consultants are a way of hiring outside experts—in law, policy, medicine, engineering. The idea is that consultants bring knowledge to Arkansas that’s not widely shared by the general public. Consultants are specialized experts with the standing to offer technical advice to legislators.

I think the Arkansas legislature is one of the best places to bring in consultants, as long as consultants have two things: 1) a mandate from the legislature to act on their recommendations and 2) a departure date. The legislature, with its part-time membership from all fields, needs unbiased expertise to make large decisions.

I don’t want the consultants to stick around, as happened with the McKinsey sole source contract. McKinsey started off with a mere $3 million contract that grew to a much larger amount over time. In the end, McKinsey cost the Department of Human Services (and, indeed, the taxpayers) $97,516,000 from 2012 to 2017. But repeat performances of this kind are unlikely; many legislators are already asking the right questions about cost. This embarrassing episode does not serve as a case against consultants generally.

Consultants are used a great deal in state government. When I searched the state transparency website for fiscal year 2017, I found 317 firms with the word “consult” in their description. For the top ten firms in this collection, Arkansas paid out $29 million. The largest “consulting” is from Cognosante Consulting, which billed DHS $18.8 million for information technology management services. There’s also a lot of imbedded consulting in other larger contracts, because state government needs these skills for short-term projects. Once a consultant has been around for too long, however, these skills should instead be a permanent part of state government at a lower cost.

Legislators are buying a little temporary advice — not a permanent arrangement.

Hiring a consultant on procurement seems like an easy way to do good reform. The legislature already tried in 2015 and 2017 to make reforms. The sooner state procurement can save money, the sooner the state can save money or buy better products. The winning vendor, Ikaso Consulting, has experience in multiple states in procurement reform: its suggestions will likely cover the cost of its much smaller $336,800 contract very quickly. According to Ikaso, Governor Haslam of Tennessee used initial procurement reforms to reduce state spending by $500 million a year. Arkansas needs real dollar savings from such reforms.

On the tax reform committee, I am also happy to see outside expertise from PFM Consulting. The state takes in $23 billion a year in revenues. Taxes are a big issue, and it’s hard to cover all areas of possible reform.

I think it’s worth the effort to quickly analyze and review taxes in this state. At $312,750, the PFM consultant contract starts off at a manageable amount. So far there’s lots of interest in tax reform, and I hope that PFM can serve all constituencies. If PFM can advise on big tax reforms, great.

Both Ikaso and PFM should be challenged to make permanent reforms to continue these efforts. Every year, the legislature looks at state contracts and taxes. How can Arkansas legislature best address these big topics every year? The best route would be to make permanent changes so that legislators can rely on advice they receive.

Let’s give both Ikaso and PFM a warm Southern welcome – and, perhaps more importantly, a nice goodbye in a year and a half. But both procurement and taxes need some thoughtful reform. A well-grounded report on both areas, with the state taking over all future implementation, is the best option.