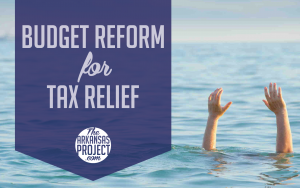 I’ve argued that Arkansas needs tax relief, but it’s just as important to cut government spending. Consider the Kansas tax cuts: Kansas’s knee-jerk tax cuts led to big budget deficits. Kansas slashed taxes in 2012; immediately, it faced a $750 million budget deficit. Over the next several years, the state struggled to find revenues to cover the shortfall. This summer the state legislature overrode Governor Sam Brownback’s veto and thus reversed most of his tax relief. The Kansas lesson is supposed to be: don’t even think of doing tax relief, Governor.

Initially, North Carolina’s massive tax relief in 2012 triggered similar fear and horror from the state’s political establishment. North Carolina started with the highest personal and corporate income taxes in its region. But instead of encountering disaster, North Carolina has enjoyed a rising state budget surplus. The tax reforms also enhanced the North Carolina business climate. North Carolina catapulted from 41st to 11th in the nation with respect to a business-friendly tax climate, according to the Tax Foundation. North Carolina’s personal income last year grew 2.4%, a sizzling pace that benefited its citizens.

Both of these states’ stories are well-known to those seeking state tax cuts. Surely, one might think, tax cuts changed revenues in those states in different ways. Some may imagine Kansas revenues as falling off a cliff into darkness, while North Carolina revenues floated upward in free-market glory.

So here’s a noteworthy chart comparing Kansas and North Carolina revenue changes. SInce these states have different sized populations, I’ve had to use percentage changes in revenues to compare them. The y-axis is percent change in revenue; the x-axis is the change over time. The chart shows that Kansas and North Carolina both suffered large declines in revenue once the Great Recession of 2006 began. Both states have slowly increased revenue growth. Today, on an inflation-adjusted basis, the two states are at the same revenue level as before the Great Recession.

Note that the revenue changes in both states are almost identical. Good and bad tax-cut strategies led to the same changes in revenue. In fact, Kansas revenues recovered a little faster than those in North Carolina. The actual tax cut plans did not lead to differences in revenues. Media accounts have created different impressions of the two states, but the revenue collection changes are quite similar.

What was the difference in these two states? The one key difference is how both budgeted for their tax cuts. Kansas was not able to control its state spending. North Carolina coordinated its tax cuts with fierce limits on state spending. The lesson for Arkansas is that budget reforms are critical to making tax cuts.

Arkansas revenue collections have been on an upward growth path. Arkansas was one of the first states to recover from the Great Recession. Today, Kansas and North Carolina collect almost exactly as much in tax dollars as they did a decade ago; Arkansas collects 15% more (on an inflation-adjusted basis) than it did ten years ago. Arkansas is way ahead of the national averages for tax collections.  Arkansas has plenty of new revenue flowing into state and local government.

Tax reforms are supposed to accomplish free-market reforms while treating everyone fairly. Sometimes that makes for tough decisions. What is certain, however, is that tax cuts need to go hand-in-hand with state budget reforms.

One thought on “Budget Reform for Tax Relief”