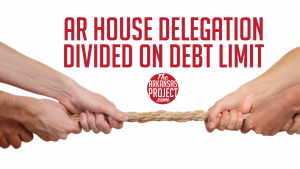 Members of Arkansas’s House delegation were divided today on whether to support legislation that raised the federal government’s debt limit and assisted Hurricane victims.

Rick Crawford and Steve Womack voted for the legislation. Reps.

French Hill and Bruce Westerman voted against it.

The legislation provides about $15 billion for hurricane relief, raises the debt limit, and funds the federal government until December.

Ryan Saylor, a spokesman for Westerman, told The Arkansas Project Westerman supported funding for hurricane victims but didn’t support including it in the same legislation with a debt limit raise.

Earlier this week, Congressman Westerman voted in favor of a clean Harvey relief bill and wished the Senate would have followed the House’s lead. The congressman believes the debt limit should have been a separate vote, not tied to a disaster relief package.

In a statement, Hill also said that he supported disaster aid for hurricane victims, but that he voted against the bill on the House floor today because the legislation raised the debt ceiling without reforming the federal budget.

While I am pleased to help those impacted by these horrific disasters, I believe raising the debt limit for three months without any reforms will only provide greater uncertainty in our financial markets, and, in turn, negatively affect Arkansas and American families. This bill provides no certainty for our military due to the continuing resolution now in place of our House-approved military budget passed July 27, 2017.Further, the Senate slipping in funding for the Community Development Block Grant Program (CDBG), which has demonstrated a lack of accountability by losing millions of dollars allocated for victims of Katrina, is a mistake.

I want to see structural budget reforms connected to an increase and extension of the federal debt ceiling, and I want to see House reforms to our failing federal flood insurance program included. As the new December deadline approaches, I look forward to working with President Trump and Congress to pass our appropriations measures to fund our military and government operations, as well as historic tax reform to benefit our American families and businesses and to create millions of new jobs.

The legislation passed this morning by 316-90. All of the ‘no’ votes were from Republicans who were disappointed that the bill was a compromise between President Trump and Democratic Congressional leaders.

Womack said the bill “was not ideal,” but that suffering from recent natural disasters made voting for it necessary.

Recent catastrophic storms have caused unprecedented hardships on Americans that we as a Congress cannot ignore. While the deal struck between President Trump and the democrats was not ideal, we cannot abandon Americans in this time of desperate need. Our fellow citizens are suffering – they need our help now more than ever.

Crawford said in a statement to The Arkansas Project:

You never know when your own state will need disaster relief, as the 1st District experienced major flooding even earlier this spring, so sending relief immediately to Texas was absolutely critical. However, pairing hurricane relief with a short-term debt ceiling increase was not my preference. In the coming months, I will be making the case to include mandatory spending limits with any future debt increase. Americans elected conservatives in part to decrease the national debt, and our conservative Congress should take that charge seriously.

Both of Arkansas’s Sens. John Boozman and Tom Cotton voted for the legislation in the Senate where it passed on Thursday.

One thought on “AR House Delegation Divided On Debt Limit”