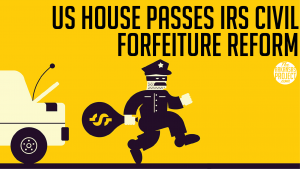 From the Institute for Justice (IJ):

Today, the U.S. House of Representatives unanimously approved a bill to stop the Internal Revenue Service from raiding the bank accounts of small-business owners. Under so-called “structuring” laws, the IRS has routinely confiscated cash from ordinary Americans simply because they frequently deposited or withdrew cash in amounts under $10,000. And thanks to civil forfeiture, the IRS can keep that money without ever filing criminal charges.

…
To rein in the IRS’ civil-forfeiture power, the Clyde-Hirsch-Sowers RESPECT Act would:

The law is named after two business owners who had hundreds of thousands of dollars seized by the IRS — despite never being charged with a crime.

The legislation was passed by the House last week on a voice vote, which can only be done if all members agree that it should be passed unanimously.

Fourteen states currently require a criminal conviction for most forfeiture cases, and twenty-four states have made some reforms to existing forfeiture laws.

Unfortunately, Arkansas is not one of these states.

Legislation requiring a criminal conviction before property could be seized through civil asset forfeiture died in the Senate earlier this year, in part because of what appeared to be a misunderstanding of the issue.