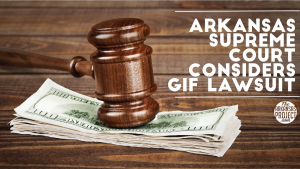 Justices on the Arkansas Supreme Court heard oral arguments today in Mike Wilson’s lawsuit — the one that challenges the constitutionality of the state’s General Improvement Fund (GIF) practices.

A Supreme Court ruling on this topic in 2005 (in response to another lawsuit by Wilson) barred legislators from using state funds for local projects with no statewide benefit.

There are eight of these planning and developments districts; in sum, they cover the entire state. Lawyers with the Attorney General’s Office and Central Arkansas Planning and Development District argue that this makes the program constitutional, since the grants appropriated by the Legislature are being received throughout the state — thus, GIF has a “statewide benefit.”
Wilson doesn’t agree. Today, Wilson called the program “money laundering” without sufficient oversight.

Appropriation bills funding GIF don’t contain specific references to what the money will be used for besides “economic development.”
Wilson said:

This court has said over and over again that the Legislature can not by artifice, scheme, collusion or whatever…supply some purpose that’s not apparent on the face of the appropriation by extraneous or outside statute, regulation or practice.

Sam Jones, counsel for the Central Arkansas Planning and Development Commission, testified before the court that the GIF process was “spread roughly equally among the entire state” and had an “elaborate application process.”
Jones said:

What we have now is a fairly elaborate process where an appropriation is made by the Legislature to the Department of Finance and Administration. Then these eight distinct planning and development districts have to submit a grant application to receive these funds for purposes of evaluating grants for economic development. What they then do is they have a staff that entertains grant applications from entities within the legislative districts that form the planning and development districts. They are formed around legislative districts…not individual Representatives or Senators. They are open for business to evaluate any grant requests that is made by anyone in the state of Arkansas who is within that district.

However, in reality these funds are only approved for certain projects when legislators request approval.
Try being an average Joe and getting tens of thousands of dollars in state funding for big screen televisions, sports tournaments, or “social justice retreats.”
The GIF program is currently not funded for this fiscal year, but it could still be revived in the future — since the Legislature didn’t end the program in the previous legislative session. We’ll have more on this story once the Supreme Court releases their decision.