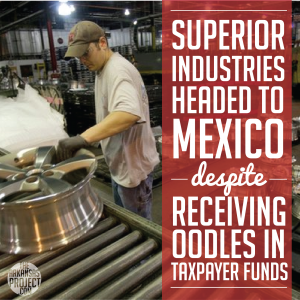 Superior Industries is closing one of its plants in northwest Arkansas. According to news reports, this will result in the loss of 500 jobs, sucking even more air out of Governor Beebe’s “jobs record.” It’s a heartbreaking story for the community, but an even more gut-wrenching tale for taxpayers — and it’s simply the latest in a long string of failures by the state to prop up private industry.
Last week, the company announced it would shut down their Rogers plant and move production to a new facility in Mexico. But how much did Arkansas taxpayers pay the company to stay in the state since they opened their doors in 1989?
The Arkansas Economic Development Commission’s Scott Hardin sent along this response to our inquiry about the incentives Superior has received:

Hardin told Arkansas Business that AEDC is in talks with Superior to move some of these jobs to their Fayetteville location, but did not announce any specific plans. All we know for sure at this point is that the Rogers plant is closing, and the Mexico plant is opening.
We have sent Hardin a follow-up request for specific dollar amounts that Superior received from taxpayers. If we receive those numbers, we’ll be sure to pass them along. However, we may never know exactly how much money Superior received: companies that receive employment-based incentives are not required to disclose their specific employment numbers and other payroll information.
All of those credits and rebates were financed by you, the taxpayers. And despite their well-intentioned efforts, this flurry of “incentives” wasn’t enough to keep the plant open — they’re packing up their (Rogers) shop, moving to Mexico, and taking a big chunk of your money with them. Do you feel like you got your money’s worth?