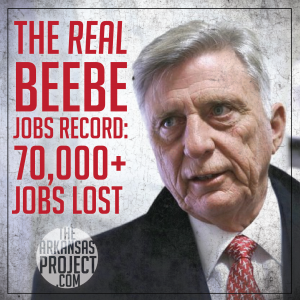 If you watch or read the news in Arkansas, you probably hear a lot about outgoing Gov. Mike Beebe’s record of “job creation.” One political columnist recently claimed that “economic development was a hallmark of the Beebe era.” Gubernatorial candidate Mike Ross released his first television ad earlier this year, attempting to tie himself to Beebe and claiming in an accompanying statement:

Arkansas has made tremendous progress under Governor Beebe…I want to build on the foundations Governor Beebe has laid in the areas of education, job creation…

But an objective look at actual employment numbers suggest Beebe’s “jobs record” isn’t one worth emulating. Gov. Beebe took office in January of 2007. Since that time, Arkansas has lost a net total of 70,034 jobs, according to the Bureau of Labor Statistics:

Numbers from BLS also show that, since the inception of Medicaid expansion in January of this year, Arkansas has lost nearly 7,000 jobs. The unemployment rate has declined since January and many state policymakers have been applauding this fact. But the “drop” in unemployment has resulted from a shrinking of the labor force: since January, according to preliminary numbers from BLS, more than 22,100 Arkansans have dropped out of the labor force.

By contrast, our neighbors in Mississippi — who did not expand Medicaid — have seen their labor force remain constant this year. Neighboring states Texas, Missouri, Tennessee, and Louisiana have all seen their labor forces increase since January. None of these states expanded Medicaid through Obamacare. This is the lowest Arkansas’s labor force has been since Beebe took office: in 2007, the labor force stood at 1.36 million.

All of this despite the fact that Gov. Beebe promised repeatedly that expanding Medicaid would “create jobs.” Since January, the state has enrolled roughly 187,000 Arkansans in the Medicaid expansion program (according to the latest reports available). Here’s a visual representation of how Beebe’s jobs record stacks up compared to his record of adding people to a new entitlement program:

A recent report from the Department of Labor also shows that Arkansas has had the fourth slowest recovery in the nation coming out of the 2008 recession.
Of course, in many ways, the debate over Beebe’s “jobs record” (and by “debate” I mean this blog post from me, because everyone else seems to give him a pass) is a bit silly. Neither government — nor governors — create value-generating jobs. Value-generating jobs are created by private actors in the free market; any “stimulus” or “economic development” done by government simply rearranges dollars in the economy. This fact alone makes the Beebe/Ross arguments absurd. But their arguments are even more ridiculous when you consider that the state has actually lost jobs during Beebe’s tenure.
(And I’m sure that, at any moment, Matt DeCample will be emailing my supervisor to inform him of the lies I’ve reported here.)