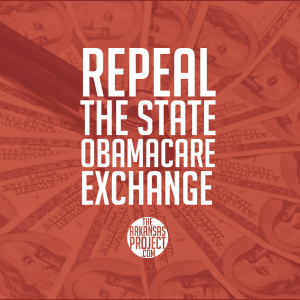 Legislators will have a chance at partial Obamacare abolition at 9 a.m. tomorrow in the House Insurance and Commerce Committee, when state Rep. Mary Bentley’s House Bill 1492 comes up for debate.
The bill would free Arkansas taxpayers from having to pick up the cost of a state exchange that is scheduled to be implemented later this year.
Arkansas currently operates under a health insurance exchange that is paid for by federal taxpayers. In 2016, however, the state must set up its own health insurance exchange, thanks to legislation passed in 2013. (As a technical matter, federal law requires a transition to a state exchange in 2015; a few months ago, however, the committee that was empowered to set up the state exchange decided to push the deadline a year into the future, which is to say 2016.)
Mar Kilmer wrote a good piece explaining the various trainwrecks that might occur if Arkansas continued towards state exchange implementation. Basically, a state exchange would cost too much, tax too much, and not allow for much in the way of local control — even though it’s labeled as a “state” exchange.
Bentley, in a speech today to the Arkansas Conservative Caucus at the Capitol, said:

According to Politico, taxpayers have footed nearly half a billion dollars for just four failed state exchanges in Massachusetts, Oregon, Nevada, and Maryland. Does Arkansas really want to join this infamous group?
We’ll find out tomorrow.
P.S.: It is interesting that this bill was assigned to the House Insurance and Commerce Committee — as opposed to the House Public Health Committee, which contains a larger number of conservatives. I’m sure it’s just a coincidence, not a ploy to strangle this bill in its cradle!