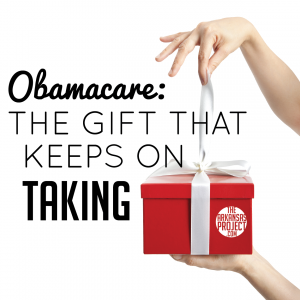 In a classic Christmas film, a wise man once said that enrollment in the jelly of the month club was “the gift that keeps on giving the whole year.”
ObamaCare is just the opposite: it’s the “gift” that keeps on taking from us, year after year.
It has already caused problems for Arkansas. In the future, it will almost certainly plague the state in new ways. That’s because, pretty soon, state law will require our state government to create its own health insurance exchange.
Right now, Arkansas operates under a health insurance exchange operated and paid for by the federal government. In 2016, however, the state must set up its own health insurance exchange, thanks to legislation passed in 2013. (As a technical matter, federal law requires a transition to a state exchange in 2015; a few months ago, however, the committee that was empowered to set up the state exchange decided to push the deadline a year into the future, which is to say 2016.)
Why is this a bad idea? Let us count the ways:

Several federal courts have already ruled against the Obama Administration’s interpretation. The U.S. Supreme Court will hear arguments about this case during 2015. If the Supreme Court upholds the language of the law (as opposed to the Obama Administration’s interpretation of it), then over 4,000 Arkansas companies would not be subject to the tax that comes with the employer mandate. This freedom from the employer mandate will only happen if the state refuses to establish its own exchange. To speak loosely, those who benefit from this freedom from mandates outnumber the Obamacare subsidy beneficiaries by roughly 10 to 1.

There is some federal funding to build an exchange, although it’s uncertain what the new Republican Congress will appropriate in the future. Once the exchange is running, either Arkansas taxpayers or the exchange’s consumers will fund it. Either way, Arkansans are going to be paying for this exchange. Earlier AAI estimates of costs of $50 million a year were, in retrospect, too optimistic — about four months ago, exchange director Cheryl Smith told legislators that she planned to request $91 to $133 million to set up the exchange.

It’s the same thing with a state health insurance exchange. State officials will be running it, but all they will be doing is following federal orders. The federal laws and regulations governing a state exchange make it little more than a façade for a federal health insurance marketplace.

Any way you look at it, a state-run health insurance exchange is bad for Arkansas.
In 2015, legislators and the new governor can give a late Christmas present to Arkansans: end the plans to set up a state Obamacare exchange. Notably, Conduit for Action recently provided model legislation to this end: perhaps Arkansas legislators who campaigned against Obamacare during 2014 will read it and then realize that opposing Obamacare entails more than signing amicus briefs and emitting windy speeches criticizing the federal government.