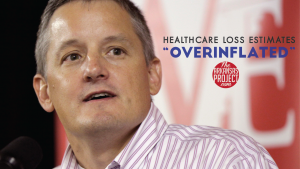 The Affordable Care Act (ACA) in its current form is headed for insolvency — and the estimate of 24 million Americans losing their health care is “overinflated” — according to Congressman Bruce Westerman.

Westerman spoke to constituents about the ongoing health care reform debate in Washington D.C. (and other topics) in a telephone town hall Thursday night.

Westerman said the ACA is on a “collision course for being insolvent” if changes aren’t made to the program.

We’re seeing across the country where…Iowa for example…94 of the 99 counties in Iowa you can’t get an Obamacare plan because the insurance companies have pulled out. We’re seeing insurance companies pulling out of other states to provide Obamacare plans. This program is imploding on itself. What we are doing with the American Health Care Act (AHCA) is trying to put a system in place that will actually help people to get the coverage they need.

The AHCA passed the House narrowly in early May, but has stalled since then in the Senate.

Westerman also addressed possible health insurance losses if the AHCA were to ever become law.

The CBO in the original score said 24 million people would lose their health care. I believe that number is overinflated. They started off using their baseline scoring which was 7 million people. They said there should be 7 million people on the system that aren’t on the system right now. Part of those 24 million that they’re saying will lose their health care are people that are being forced by the government to purchase health care with the mandates. I don’t think anyone should be forced to purchase health care. We’re trying to put a system in place that will provide people options where they’ll actually want to purchase health care. We’re putting stuff in place like risk pools to help lower the cost of insurance. Right now we’re seeing insurance companies say that the cost of premiums could go up as much as 40 percent in some places. We’ve seen an increasing cost of insurance since the Affordable Care Act has been in place. This program is broken. I believe what we’re putting in place is a much better program. It’s got some things that I would like to change in it. It’s got some things that I hope the Senate will make some changes on, but it’s far better than anything the Affordable Care Act ever offered in its current state.