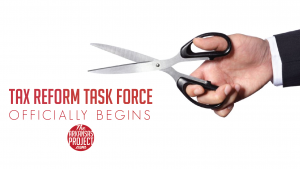 The Arkansas Tax Reform and Relief Task Force held its first meeting today.
The task force was created by the Arkansas legislature in the 2017 legislative session to examine ways to make the Natural State’s tax climate more competitive with surrounding states.

Speaker of the House Jeremy Gillam opened the meeting by outlining the goals for the tax force.

This is going to be a very robust debate that will take place over the next year and year-and-a-half as to our tax policy here in Arkansas. I know a lot has been written about the mandate so to speak…it seems to always be mentioned that it’s about which tax cuts are going to be put forth in the next General Assembly. I think you are all familiar that is not exactly the overriding mandate of this task force. We’ll look at reform and relief to make Arkansas competitive with our surrounding areas to make sure we have a viable tax policy.

While it’s true that tax cuts aren’t the only aspect of Arkansas’s tax code that the task force will be examining, the group was established to examine tax cuts with possible closing of loopholes in the tax code.

The only official action the task force took today was naming co-chairs from the Senate and House. The co-chairs selected were State Sen.

Hendren’s selection was passed with a unanimous vote. Jean jokingly voted “nay” against his selection as co-chair.

Jean said after his selection as co-chair that the task force would attempt to “get a consensus” for a plan to bring tax reform to Arkansas.

I think what we’ve got to do is get a consensus out of this committee and we look throughout the state. I’m glad we’ve got Eastern, South, Northeast, West, Northwest represented (on this committee) to do a good job of getting a consensus of this committee…to be fair on taxation. I look forward to the next year of looking at coming up with something that will help Arkansas grow its economy.

The task force members will be responsible for submitting a report on improving Arkansas’s tax code by September 2018 before the 2019 legislative session.

According to the Tax Foundation, Arkansas has the highest top individual income tax rate as compared to the surrounding states — 6.9 percent.

The task force can expect to face significant opposition in the coming months from special interests hoping to thwart attempts to end various tax credits, loopholes, and deductions in order to simplify Arkansas’s tax code.