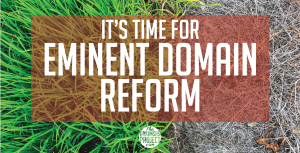 “Arkansas’s present eminent domain laws have a number of notable shortcomings that leave property owners vulnerable to abusive takings.”
That is the conclusion of Ilya Somin, a George Mason University law professor. He recently wrote an informative paper for the Arkansas Center for Research in Economics, or ACRE, on eminent domain in Arkansas.

Eminent domain is the ability of the government to confiscate private property upon compensation of that property’s owners. This practice is supposed to be used for public purposes, such as the building of roads, but the rationale for doing this has steadily expanded. There was a lot of attention to this in 2004, when the U.S. Supreme Court issued its infamous Kelo v. New London decision. The majority in this case held that there were no constitutional limits on governments using this power to seize property and give it to a private corporation, because that corporation would allegedly pay more in taxes than the original owner.

Somin points out that many states – but not Arkansas — placed limits on what property can be taken with eminent domain in the wake of the Kelo decision. This means there is ample room for legislators to enact reform now.
Here are some of the problems that legislators should address, according to Somin:
Undervaluing property – By using only the “fair market value” of a property in determining what it will compensate owners, Arkansas harms owners who have a higher subjective value of their property. For instance, suppose a property being seized has been in a family for generations or a business is in a particularly good location for that particular business. A price based on fair market value may be a good approximation of what someone else would pay for a property, but this leaves out the reality that the owner may value the property even more (which is why he or she is not selling it freely).

Other states have enacted reforms that try to address this issue. Here is what Somin recommends:
The simplest approach would be to add a set premium, perhaps 20 percent, to the fair market value of condemned property. This would help compensate for subjective value, though it might overcompensate in some cases and undercompensate in others. An alternative approach would have varying premiums based on the nature of the condemned property, with a view to giving the highest compensation in cases where subjective value is likely to be unusually high. For example, there could be extra compensation for homeowners (particularly those who have lived in the same home for a long time), houses of worship, and small businesses.

Ambiguity about pipelines – Arkansas law allows for companies constructing pipelines to use eminent domain, but the law is unclear on whether these pipelines must be “common carriers,” which serve the entire public. To fix that, Somin recommends that “Arkansas legislators should pass laws making clear that eminent domain may only be used for pipelines that are genuine common carriers, and requiring those that seek to use eminent domain to provide proof of common-carrier status in advance.”
Abuse of “blight” designation – If an area is blighted, Arkansas law allows the use of eminent domain to transfer property to private parties for redevelopment. Somin notes that the state law “puts few meaningful constraints on blight takings.” The definition of blight in state statute could be interpreted quite broadly to apply to many places that ordinary citizens would not consider blighted. Somin recommends that the state tighten up its definition of blight to apply to areas that are severely dilapidated or that pose a threat to public health. Or, he says, the state could just end the ability to use eminent domain in blighted areas. New Mexico and Florida have done this, thus eliminating the threat that an overzealous bureaucrat could misuse the state’s eminent domain power.

As this paper points out, there is a significant potential for abuse in the state’s eminent domain law. Legislators have an opportunity to fix these problems. ACRE has done a good job laying out a roadmap for them to follow if they want to do so.

Disclaimer – I am working on a project for ACRE, although not on the subject of eminent domain reform.