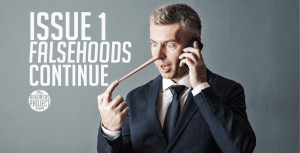 The fate of Issue 1 will not be decided until November. Unfortunately, the disinformation campaign against this tort reform amendment has already begun in earnest.

Take this letter that appeared in the Northwest Arkansas Democrat-Gazette. It makes a hodgepodge of charges against Issue 1, starting with the charge that it somehow deprives Arkansans of the constitutional right of a trial by jury in civil cases. The author tries to make the claim that Issue 1 changes the state constitution’s guarantee that “every person is entitled to a certain remedy in the laws for all injuries or wrongs he may receive in his person.”
That, of course, is false. Under Issue 1, if you have suffered a wrong from someone else, you can still have a jury trial. These jurors can weigh the evidence and decide if you have indeed been wronged. They can still compensate you for the amount you have been wronged.

The implication that this would violate either the state or federal constitutions is absurd. As discussed previously on TAP, most other states have caps on non-economic damages. It is ridiculous to think that the caps in these other states have survived constitutional scrutiny, but Issue 1 will not.

The author goes on to make this claim:

The framers of the constitutions, while the framing quill was still dripping ink, could have added, “… provided, however, no person shall ever recover more than $250,000.”…
The framers set a lower limit–$20–but no upper limit because they knew they could not predict, in advance, the damages, injuries, loss and compensation a person is entitled to, guaranteed by our constitutions

Presumably, this letter writer is trying to make the claim that Issue 1 caps damages in civil suits at $250,000. That, too, is completely off-base. This proposed constitutional amendment places no cap on observable damages. If you have suffered damages  of $15 million, then juries can still award that to you if Issue 1 passes. There is no cap on the compensatory damages that can be awarded by juries under Issue 1.

Implying that juries will no longer be able to award damages more than $250,000 if voters approve Issue 1 does not stand up under scrutiny. Nor is it a supportable claim that Issue 1 violates the Constitution. And yet, these are the kinds of things we can expect to see from now until November. Those who want to thwart tort reform will do everything they can to confuse voters. This letter, though unclear and poorly written, is a good example of the tactics that Arkansas voters will be subjected to.

If these are the types of falsehoods that are already being spread about Issue 1, we can certainly expect even worse in the months to come. At TAP, we’ll be here to counter them and make sure the voters of Arkansas know the truth about tort reform.