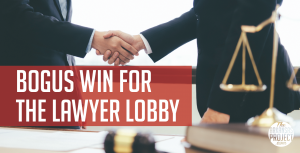 Well, they did it. The lawyers have succeeded in persuading a judge to deny Arkansans the right to vote on tort reform.

Circuit Court Judge Mackie Pierce has ordered Issue 1 removed from November’s ballot. His reasoning? The various sections of Issue 1 were not “reasonably germane” to one another.

This is, quite simply, absurd.

As I wrote about when the lawsuit against Issue 1 was filed, this idea is “flatly bogus legal reasoning that the state Supreme Court has shot down in the past.” I could go on to re-write that blog post, but that’s unnecessary. The facts laid out there are unchanged, even if Judge Pierce fails to recognize how the Arkansas Supreme Court has ruled in the past.

It is absurd to say that the various parts of Issue 1 are not “reasonably germane” to one another. The state constitution is a complex document. When attempting to amend one part of that document, it is often necessary to amend other parts, too, so that they are consistent with one another. I explained in greater detail in my previous TAP post on this:

Issue 1 involves the general subject of limiting legal fees and awards and allowing the legislature to have some say in setting rules of practice and procedure (which relate directly to the issue of fees and awards). The sections are not on exactly the same topics, but they all relate to the same issue – how the courts operate in Arkansas. Each section speaks to a form of that general subject. They are certainly reasonably germane to each other.

The standard upon which the lawyers are seeking to invalidate Issue 1 (and apparently the argument bought by Judge Piece) is an unworkable standard that the supreme court has rightly rejected in the past.

Assuming it decides to follow the law, the state’s high court will do so again.

In future TAP posts, I’ll look over Judge Pierce’s decision and explain the flaws I see in it.