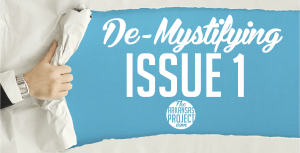 The tort reform amendment on November’s ballot, Issue 1, is on quite a few voters’ minds. At least it is on the mind of Jim Pumphrey, who recently wrote a letter to the Hot Springs Sentinel Record. In that letter, Mr. Pumphrey made this request: “I hope one of the Republican readers can explain Issue 1 that has been referred by our Republican state legislators for our vote in November.”

Well, he didn’t ask TAP directly to do this, but I’m happy to take a shot.

Mr. Pumphrey had a lot to say about Issue 1, and not much of it is positive. This hostility towards tort reform appears to be misplaced since Mr. Pumphrey doesn’t seem to understand what it would do. Hopefully, he’s a faithful TAP reader and, once he reads this blog post, he’ll have his confusion cleared up.

First, Mr. Pumphrey takes a shot at guessing what this constitutional amendment is about: “It seems to say that the Legislature wants to cap work comp injuries/death payments because every case is the same and they want to help businesses avoid the pesky trouble.”
That is not an accurate summary at all of Issue 1. It has nothing to do with workers’ compensation. It certainly does not say that “every case is the same.” Instead, its main aim is merely to put a cap on awards for non-economic damages. Under Issue 1, juries would still weigh the facts of the case and assess economic damages with no cap at all.

Pumphrey goes on to have questions about the rule-making authority of the legislature under Issue 1:

Also, there is much legal garble in the proposal about the state Legislature wanting the power to “amend or repeal rules prescribed by the Supreme Court” and then they may adopt other rules (of their liking) to direct the court’s actions. Are the federal laws of separation of powers (which our national Congress is afraid to enforce) being suspended entirely?

No, “federal laws of separation of powers” (whatever those are) are not being suspended. This is a state constitutional amendment, not a federal one. But since Mr. Pumphrey brings up the federal government, he may be interested to know that Congress has a role to play in setting federal judicial rules. Passage of Issue 1 would move Arkansas much closer to the federal model of separation of powers between the legislative and judicial branch than the situation that currently exists in the state. It would also return the state to a situation regarding the legislature’s role in judicial rulemaking that existed for most of the state’s history.

From reading Mr. Pumphrey’s letter, it is apparent that he has strong feelings about Issue 1. He also has some strong misconceptions about what it would do. Issue 1 does not, as he thinks, treat “every case the same.” It also does not violate the separation of powers.

In a nutshell, Issue 1 will make it much less risky for doctors to treat patients. It will establish the same safeguards for the medical profession that our surrounding states have. It is reasonable to predict that it will attract more doctors to Arkansas (on a per capita basis, Arkansas has an incredibly low number of doctors) and improve both our health care and our business climate.

I’m sure that Mr. Pumphrey’s not the only one who has been confused by the trial lawyer lobby’s campaign against Issue 1. I hope that we can do our small part on TAP to counter this confusion and de-mystify this commonsense amendment.