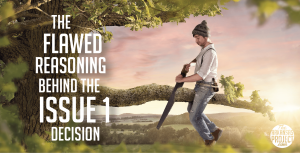 According to Judge Mackie Pierce, Issue 1 is unconstitutional. He has ordered the state not to count the votes for or against the amendment. In short — he is attempting to deny the voters of Arkansas a say on tort reform.

As you know from reading TAP, there are a lot of good arguments in favor of tort reform. Opponents of tort reform have been trying to convince the state’s voters otherwise. That’s how democracy works – each side makes its arguments and the voters decide. And while I don’t find the arguments against Issue 1 persuasive, at least they have some logic. However, I cannot find much logic in Judge Pierce’s decision that essentially pulls Issue 1 from the ballot.

The problem with Issue 1, according to Judge Pierce, is that it does not meet the single-subject test required by the state constitution. That is, the four sections of Issue 1 are not relatively germane to a general subject. Judge Pierce writes, “The general subject [of Issue 1] is unclear to this court.” Perhaps Judge Pierce should have read the popular title of Issue 1, which states: “An Amendment Concerning Civil Lawsuits and the Powers of the General Assembly and Supreme Court to Adopt Court Rules.”

The first two sections deal with civil lawsuits. The first section concerns contingency fees and the second punitive damages. Those sections are certainly germane to each other. The last two sections concern authority to make court rules. This authority to make court rules is directly related to civil lawsuits. As discussed previously on TAP, the state judiciary interprets its rulemaking powers so broadly that prior attempts at legislative tort reform have been overruled by state judges. To prevent the courts from invalidating legislation necessary to implement these civil lawsuit reforms, it is necessary to ensure that the courts cannot invalidate them by claiming that legislators are improperly setting court rules. Thus the need for sections 3 and 4 of Issue 1.

This shouldn’t be a difficult concept to grasp. While there are clearly four different parts to Issue 1, they all relate to reforming the state’s judicial system, especially as it relates to torts. Yes, each part of Issue 1 affects a different part of the judicial system, but they all work together as a whole to promote tort reform.

This is something like an experience that I had regarding my lawnmower. After storing it for the winter, I found it impossible to start in the spring. So I took it to the shop and asked them to see if they could get it running. I also asked that they put a new blade on it. When I went back, the mechanic had fixed the engine. He also put a new blade on it. He then recommended some gasoline stabilizer, since he thought that ethanol in my fuel may be responsible for the engine problems. So I picked some up and paid the bill. This bill encompassed three separate items – engine repair, blade replacement, and gasoline stabilizer – but all of them were reasonably germane since they were all related to getting my lawnmower in condition to cut the grass.

Interestingly, Judge Pierce condemns the cap on contingency fees as “clearly an infringement upon the rights of citizens of this state to freely contract.” The judge ignores that there are already restrictions on contingency fee contracts. Doctors and lobbyists, for instance, cannot be paid based on results. There are also laws that limit contingency fee contracts for lawyers. How can Judge Pierce fault Issue 1 for infringing upon someone’s right to “freely contract” when this type of infringement is well established already?

While I am not a lawyer, I find the judge’s reasoning to be highly questionable. This case will, of course, be decided by the Arkansas Supreme Court. That body ruled against similar specious reasoning in 2011. Let’s hope that the high court’s judges do so again this time.