One of the more ridiculous arguments that legislators have made in support of the Medicaid expansion “private” option (Republican legislators, in particular) is that the “private” option is a “conservative response to Obamacare.” Rep. Charlie Collins regularly makes these types of claims on his Twitter feed; Speaker Davy Carter famously said last year that “a vote for the private option is a vote against Obamacare.”

The absurdity of this tactic reached a kind of climax earlier this week, when an attack postcard appeared in mailboxes across Garland County. The card accuses State Senator Alan Clark of wanting to “bring Obamacare to Arkansas” because he opposes the “private” option. You may have to see it to believe it: 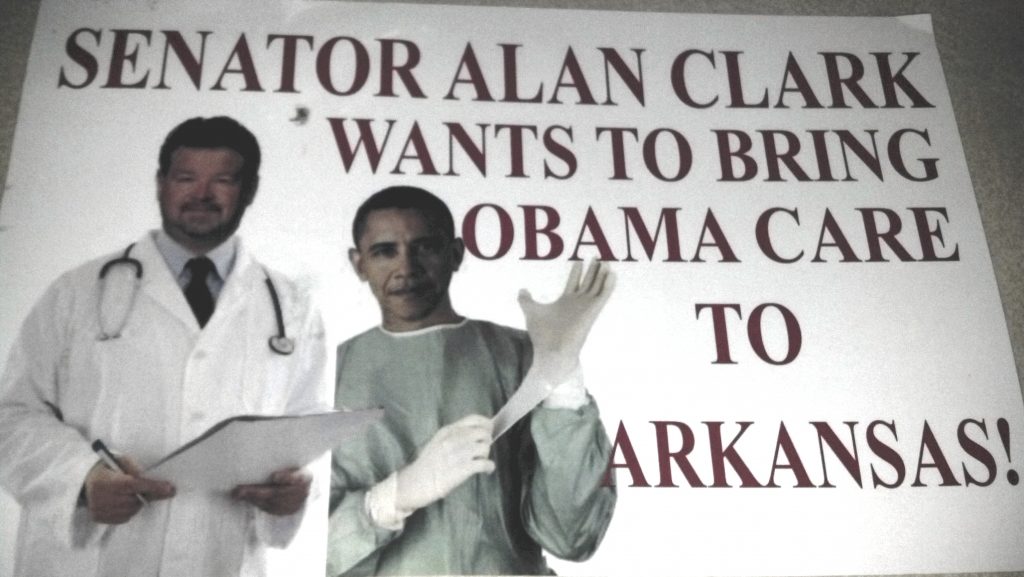 This card’s over-the-top message isn’t the only unusual thing about it; it’s also unusual because Senator Clark isn’t even up for re-election this year. In fact, Clark won’t appear on the ballot again until 2016.

The most remarkable thing about it, though, is that it’s the latest evidence we have that President Obama and his policies are incredibly unpopular in Arkansas — so unpopular, in fact, that even advocates of Obamacare don’t want to be attached to Obamacare. In short, Obamacare boosters are now forced to disguise their message in order to complete its implementation.

As for the claims that he actually supports Obamacare, Senator Clark issued this statement to The Arkansas Project:

It is a lie, of course. No one has stood firmer against Obamacare than I have. The Private Option is the expansion of Medicaid, which is Obamacare. So, while lying about my position on Obamacare, they actually want me to vote for Obamacare. Dirty politics like this requires that voters be uninformed. In speaking to close to 30,000 people during my campaign and dozens every week, it seems my constituents are very clear on my stand against Obamacare and the Private Option.

Senator Clark is right: he has been a staunch opponent of all forms of Obamacare in the state, including Medicaid expansion and implementing an Obamacare exchange. In last year’s legislative session, he regularly voted “no” on both of these proposals. Last week, when the funding for Medicaid expansion was debated in the state Senate, Clark voted against the bill and even spoke against it: he warned all the state agencies who are seeking budget increases that the catastrophic fiscal impact of this program will likely eliminate additional funding for their departments in the future — and perhaps even force budget cuts.

Obamacare is in critical condition in Arkansas; the advocates of this disastrous law know this. Senator Clark is right to point out that dishonest campaign tactics reflect poorly on the reputation of those who carried them out, but it’s also worth noting that they illuminate the rock-bottom reputation of Obamacare.

One thought on “Supporters Of Obamacare Hate Obamacare!”