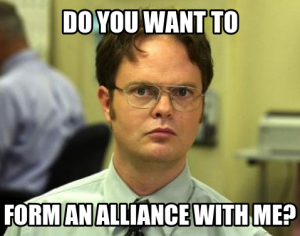 27 House Republican legislators have signed and delivered a letter to Speaker Davy Carter that says, quite simply: it’s time to negotiate a way forward on the Medicaid budget. Last week, the House voted four times on passage of the DHS/Medicaid budget (which includes funding for the Obamacare “private” option). The bill failed all four times.

The letter was presented to Speaker Carter today. You can read it here in its entirety.

At your direction, our chamber has been voting on the DHS-Medical Services appropriation without passage for four consecutive dates. We are aware that it is your expressed intent to continue voting on the bills until passage.

It is our belief that an impasse has occurred that cannot be resolved without more unnecessary tension within the House membership and within our own caucus. Because of that we respectfully request a different approach.

It is our strong recommendation that before [the “private” option funding bill] is presented to this body again for a vote that proponents and opponents of the Private Option be allowed to sit down together to discuss a way forward. This request implores you personally to help facilitate these discussions.

It’s also important to point out that, while Carter has referred to the “minority of legislators” who are holding up the PO funding, some would see these 27 legislators as a pretty important majority. In fact, they constitute a majority of the Republican legislators in the House.

I spoke briefly with Rep. Joe Farrer who spearheaded the effort to draft the letter. I asked him what message the group is trying to send to “private” option supporters:

We believe that we are at an impasse with the bill and amendment as it currently reads. We want to sit down with the supporters of the private option and try to negotiate a plan that both sides can support. All we want is a seat at the table.

Carter has been insistent that he will not negotiate on the bill. In fact, he’s said repeatedly, “There are no negotiations.” However, after pledging to “vote every day – for the next 25 days if that’s what it takes – until we pass the bill,” Carter changed course today and declined to hold a vote. Perhaps this is a sign that the Speaker is now ready to listen to other ideas about a path forward on the Medicaid budget. That’s probably a good thing, because the Speaker’s preferred route to funding the “private” option is beginning to look implausible.

4 thoughts on “House GOP To Speaker Carter: We Need To Talk”