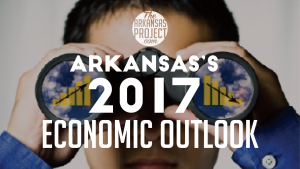 Arkansas’s economic outlook recently dropped — more precisely, our rank among other states dropped from 20th to 23rd in the nation, according to the 2017 “Rich States, Poor States” study.
Jonathan Williams, one of the study’s authors and the American Legislative Exchange Council’s chief economist, said regarding the rankings:

As we celebrate the 10th edition of Rich States, Poor States, the presented data remains consistent in its message. State governments are constantly competing for Americans and jobs, and in this fast-moving environment, standing still is enough to get left behind. States that have adopted pro-growth policies have enjoyed robust economic expansion, with greater wage growth and more opportunities for citizens. The facts remain clear that pro-growth policies are working and there is a clear trend in favor of market-oriented reforms.

When the states that surround Arkansas were examined, the study concluded that Missouri and Louisiana had slightly worse economic prospects, while the prospects for Texas, Oklahoma, Mississippi, and Tennessee were more positive.

The report highlighted many of the same positives and negatives that have affected Arkansas’s economic outlook in previous years.

Arkansas’s ranking benefitted from being a right-to-work state, having a low property tax burden, and for being free of an estate/inheritance tax. Arkansas’s ranking was harmed by having a higher-than-average progressive income tax system (meaning: most states are less eager than Arkansas to tax you relatively more as you move up the economic ladder), a much higher sales tax than almost all of the rest of the nation, and a burdensome tort litigation system.

Fortunately, Arkansas voters and legislators will have opportunities in the near future to solve these problems. Tort reform will be on the ballot for voters to consider in 2018. The legislature and Gov. Asa Hutchinson also recently created a task force to study ways to make Arkansas’s tax system more competitive with the rest of the nation.

You can read the rest of the report here.

One thought on “STUDY: Arkansas’s Economic Outlook Falls In 2017”