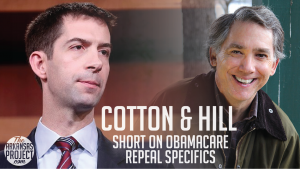 French Hill enjoyed a polite and intellectual discussion with their constituents this afternoon at the Embassy Suites in west Little Rock.

Just kidding. The crowd of attendees — numbering approximately 700 — was mostly hostile from the start. I’m going to guess a majority of the attendees were left-wingers, but that could just be a result of how vocal they were throughout the event.

There were definitely a sizeable number of attendees supportive of Cotton and Hill, but my ears are still ringing from the shouting and heckling that took place while Cotton and Hill attempted to answer questions from people that obviously hated their guts.

I knew from the beginning it was going to be a tough crowd after a couple of ladies started yelling about separation of church and state while some poor guy tried to say an opening prayer.

I also spotted an elderly gentleman flipping off Cotton when he was unsatisfied with an answer about Trump’s tax returns. He would later refer to Cotton and Hill as “kindergarten kids” during a question about drug prices.

A gay female farmer from Roland also ended a question about the farm bill and gay rights legislation by claiming she’d been “screwed twice” by Cotton and Hill, due to their voting history. Presumably, she was speaking metaphorically.

The bottom line: when Cotton and Hill staffers start looking for campaign-commercial footage of their bosses speaking before adoring crowds, I’m afraid this town hall probably won’t make the cut.

With respect to actual policy discussion, Hill said he’s still committed to repealing and replacing Obamacare but didn’t tread any new ground today with his answer.

It’s absolutely incumbent on the Congress to work together to try to reform, repeal, and replace the Affordable Care Act (ACA) and get something that works for American families that reduces premiums, make healthcare more affordable and give better access. One thing we’re looking at is trying to do something that not only produces more competition, more access but also brings down the federal budget deficit that has contributed to high healthcare costs.

Cotton said “part of the problem” he had with the House repeal legislation introduced last month was that it was “moving too fast” and could have resulted in the 300,000 plus Arkansans on Medicaid expansion losing their coverage.

Part of my problem with the bill that was introduced to the Congress last month was that it could have had that result and it was moving too fast. I thought it was better to slow down and get it right rather than doing it fast. I do support repealing Obamacare. I have no doubt that some Arkansans have benefited from Obamacare…many of them were hurt by Obamacare, though, with higher premiums, higher deductibles, higher co-pays and lost access to doctors of their choice. In my opinion, we can get health care to people who need it without hurting so many people.

To my knowledge, there was nothing in the House repeal legislation that kicked current Medicaid expansion enrollees off the program, but Cotton has a point about the need for prudence when dealing with such a complicated issue.

There’s nothing wrong with taking more time to make sure a repeal bill is a better product in the end. The danger is that prudence becomes an excuse for inaction. Republicans weren’t elected in 2016 to tinker with Obamacare around the margins.

It’s clear from today’s town hall that there are a non-trivial number of central Arkansas leftists who are still mad as hell about the election results, and I see no reason why they won’t carry this anger to the ballot box in 2018. Republicans in Congress will need to make good on promises they made in the 2016 campaign if they hope to combat this energy in 2018.

One thought on “Cotton, Hill Short on O’Care Repeal Specifics at Town Hall”