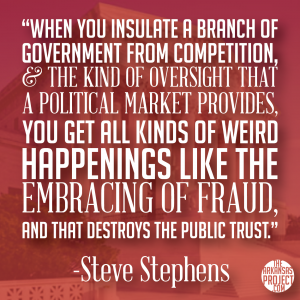 Jackson “Steve” Stephens is a political powerhouse. He is chairman of the board of the Club for Growth – an organization that has been tremendously successful in forcing Republicans in Congress to stick to principles of lower taxes and limited government. Stephens was also the plaintiff in a recent lawsuit which attempted to block the statewide vote to hike the minimum wage. Shortly after the Supreme Court rejected Stephens’ suit to block the initiative, he responded with a statement ending with what I thought was a highly pregnant sentence, namely: “a judicial-recall provision as an initiated act is the most appropriate response to this and other shocking judicial decisions Arkansans have been subjected to this year.” I thought this statement invited certain questions; Stephens took my call and laid out his thoughts about the Arkansas judiciary and his future plans. A shortened and edited transcript of our conversation is below.