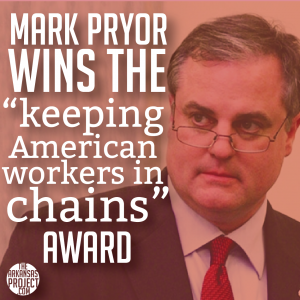 Mark Pryor won an award this week for all the wrong reasons.
The National Right to Work Committee Tuesday blasted Senator Mark Pryor, naming him as a winner of a Union Brass Award, given “in recognition of the Senator’s efforts to help the Union Brass keep American workers in chains.”
NRTW Vice President Greg Mourad delivered the award, a set of handcuffs mounted on a plaque, to the senator’s Little Rock office.
Mourad said the National Right to Work Committee issues the Union Brass Award periodically to help mobilize people to bring grassroots pressure to bear on politicians who have supported labor unions’ radical, forced-dues agenda.
Presenting the award, Mourad said:

Mark Pryor has been in Big Labor’s corner for his entire career.

In documenting Pryor’s record of putting union bosses ahead of rank-and-file workers, Mourad also noted Pryor’s vote for the “card check” bill. That legislation would have replaced the secret-ballot process in union elections with a system that lets union organizers pressure individual employees, one at a time, into signing “union authorization cards,” which would give union bosses monopoly bargaining power over all employees in the bargaining unit.
As our readers may remember, Pryor also voted against the National Right to Work Act in 2009, a bill that would eliminate union bosses’ power under the National Labor Relations Act to force workers to pay dues or be fired.
Mourad said:

“In addition, Pryor voted for a bill to force all 50 states to set up forced unionization schemes for every police officer and firefighter in the country – a first step toward putting all state and local public employees under union control. Of course, public records show that Pryor has received hundreds of thousands of dollars in hard-money contributions from AFL-CIO-affiliated unions. When AFL-CIO boss Richard Trumka spends that kind of money in Arkansas, he knows what he’s buying – Mark Pryor’s help in keeping rank-and-file workers under his monopoly control.

According to most polls, it looks like Pryor will be looking for another job after next week’s election. (I hear lobbying is a booming industry!) The Union Brass Award is a nice demonstration of how the Pryor voting record is out of touch with everyday people in Arkansas.