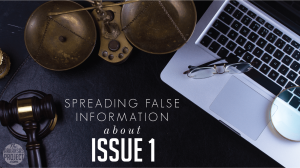 Jerry Cox seems like a nice guy. We recently had an amiable phone conversation over an issue where we disagree, but it never got personal. On many issues, in fact, I am probably aligned with Mr. Cox. But when it comes to Issue 1, we part ways. That’s fine – reasonable people can disagree about tort reform. But I am afraid that in his opposition to Issue 1, Mr. Cox is spreading false information.

The false information at question is his contention that, upon passage of Issue 1, juries would not be able to award families anything more than $500,000 if someone killed their minor child. On August 22, Mr. Cox wrote a letter to pastors across Arkansas setting up a story that is sure to pull on the heart strings – a preschool leaves a 5-year-old girl trapped inside a van to die slowly from the heat. As a father of a small child, I can see why Mr. Cox picked that story; there are few situations that would be more tragic.

Using an emotional story to advance your position is a time-honored tactic in politics. I have no problem with that. But I do have a problem with the claim made by Mr. Cox is that Issue 1 will limit the jury award in this case to $500,000 (plus, perhaps, funeral expenses). That is simply false.

So I decided to talk to Mr. Cox to clear up any confusion about jury awards and Issue 1. During that call I asked him if he was aware that it is a feature of tort law that juries can calculate and award future earnings for children. Cox said, “I disagree with that. I don’t believe that is the case.” I said that Arkansas jury instructions explicitly ask jurors to assess the value of salary or earnings that the injured or deceased child could be predicted to have earned. Cox replied, “That’s impossible. Juries can’t tell if a child will be a brain surgeon or the next Sam Walton.”

That is true, but it is somewhat beside the point. No jury can know the exact future earnings of a child. No one can. Of course, that same objection can apply just as easily to the ability of juries to predict the future earnings of a professional adult. No one can predict the future, and that is not what juries are tasked to do. They make reasonable predictions based on the evidence at hand. Whether that is for a working-age adult or a child, there are ways to do that. Juries can (and are) asked to decide on what a child would have been reasonably certain to earn upon reaching adulthood.

The idea that juries can be asked to calculate potential future earnings of a child is something that is well-known in the civil ligation world. From scholarly articles to business blog posts, this idea is widely discussed. Not only can juries be asked to do this, they actually do it – and they do it in Arkansas. In the Kara Smalls verdict in Camden last year, the jury awarded about $46 million in a medical malpractice case, with about $3.2 million in damages (about 1/15th of that) for hypothetical loss of future income.

Mr. Cox told me that “The idea that juries will be able to go around the cap and award people their justice is absurd.” But awarding damages for a child’s potential future earnings is not going around the cap. Instead, it is exactly how the civil lawsuit system works today and how it will work under Issue 1. He also said, “We disagree on how these instructions would play out once they got to court.” As noted above, however, juries in Arkansas already award such damages. That is how it plays out today and Issue 1 would not change these instructions in the future. To put it in a less diplomatic way, a central premise of Jerry Cox’s anti-tort reform advocacy is flatly wrong — whether he agrees with me or not.

As our conversation progressed, Mr. Cox continued to deny that juries are allowed to provide awards for a child’s future potential earnings. Perhaps if he reads this blog, he can see the links to the information and see that what I was saying is indeed true. In response, he asked me about harms suffered by people who aren’t children. It is a good question, and one we can explore later, but it is irrelevant to the letter he sent to pastors in August. He chose to highlight the case of preschooler killed in a hot van. He chose that situation because he knew it would appeal to every parent’s worst fear. By doing so, however, he used a scenario that does not support his arguments against Issue 1.

During my conversation with Mr. Cox, it was clear that he was not aware that juries can and do award damages for potential lost earnings of a child. That is understandable since there are many aspects of the legal system that the general public is unaware of. But it is his job to be informed when he holds himself out as an expert. Saying that such compensation cannot be awarded is, to put it bluntly, a falsehood. I don’t think Mr. Cox intended to be deceptive when he said it, but he did not do his homework before he said it and, thus, spread falsehoods about Issue 1. Even as I write this, Jerry Cox is in the midst of a political blitz across Arkansas, busily presenting his views on Issue 1. It is disturbing to me, and it should be disturbing to you, that he’s so busily presenting false information.

My conversation with Mr. Cox went beyond the issue of compensation and into the wider issue of tort reform. My post tomorrow will explore that matter further.