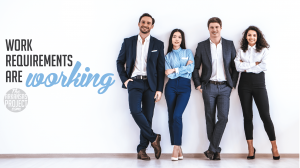 If you are an able-bodied Arkansan on Medicaid, should you work or be looking for work? In Arkansas, the answer is “yes,” at least for a small portion of the state’s Medicaid population. The rationale behind this requirement is that recipients should be encouraged to move into the workforce, with the ultimate goal of moving onto private insurance rather than Medicaid. According to a recent op-ed, this requirement is indeed encouraging recipients to find work.

Arkansas is the first state in the nation to impose a Medicaid work requirement, and it is only a few months into implementation. Obviously, it is too early to declare it an unreserved success. However, Sam Adolphsen of the Foundation for Government Accountability writes in a recent Washington Times op-ed about the early indications that the state is achieving its goals:

In Arkansas, 55 percent of able-bodied adults on Medicaid did not work at all before work requirements were implemented. Less than three months after the reform was implemented, 62 percent on those subject to the work requirement are working at least 80 hours a month, training or looking for work. Enrollment of able-bodied Arkansans on Medicaid has dropped by 20,000 since earlier this year.

He also points out that this requirement is not widespread. In fact, it only involves a small subset of Medicaid recipients:

Of the state’s 270,000 adults enrolled in Medicaid expansion, only 34,000 are currently subject to the work requirement.

The requirement only applies to able-bodied adults between ages 19 and 49 with no kids in the home — anyone with kids at home, with any type of disability, in drug or alcohol treatment, or with a short-term incapacitation is exempted.

This is an issue we have covered previously on TAP. The predictable outrage over Arkansas’s work requirement does not stand up to serious scrutiny. Traditional Medicaid recipients – people with disabilities, mothers and expecting mothers, et al – are not covered by the mandate. Is it really too much to ask able-bodied adults who do not have children at home to work or look for work? Most people don’t think so.

Clearly, as with any government program, implementation can (and probably is) a problem. But the overall goal of work requirements is something that should be broadly embraced across the political spectrum. As Arkansas is demonstrating, these requirements can have tangible positive effects.